The amazing migrations of Ringed Plover, concerns about Spotted Redshank and lessons from Little Tern conservation …

… just three of the highlights from WaderTales in 2018.

Seventeen new WaderTales blogs were published during the year, bringing the total so far to 65. There are three articles about Black-tailed Godwits (total now 16), two more focusing upon Icelandic research (total 8) and lots of new single-species and conservation-related tales to catch up on. The most widely-read blog is a review of global survival rates in waders and the least popular (so far) is one that looks at site fidelity in breeding Black-tailed Godwits.

There are several WaderTales blogs about the expanding population of islandica  Black-tailed Godwits and the fast-disappearing limosa birds. This year, it was a pleasure to report on the success of ‘head-starting’ as a means of boosting the British breeding limosa population.

The range of wader research in Iceland has expanded over the years and these blogs give a taster of the the breadth of the work. 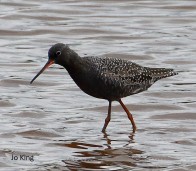 This section is a bit of a miscellany. Each blog is focused on a particular species and is usually based on a scientific paper that highlights a broader issue of conservation importance.

Issues in wader/shorebird conservation and science

Waders across the globe are subject to huge pressures, with several species close to extinction. In some areas we are seeing reduced annual survival – which is a serious issue in species which were thought of as long-lived birds – and many populations are finding it hard to raise sufficient youngsters to sustain numbers.

Want to read more? To see a full list of the WaderTales blogs that have been published since 2015 CLICK HERE.