When you receive a list of sightings of a colour-ringed bird that you have reported to a scheme organiser, it can hide a wealth of information. Here’s one such bird.

There are some colour-ringed Black-tailed Godwits that have generated two hundred or more sightings at well-watched locations but BR-YGf is more typical. When seen in Cambridgeshire on 26 March 2018, that was only the 12th observation in the database. (There’s an update from Essex at the end of this story).

The Black-tailed Godwit that was soon to become BR-YGf was wintering in Portugal when caught in a mist net, by José Alves and a team of other ringers, just before dawn on 25 October 2014. It was given a unique set of three colour-rings and a flag, that would enable it to be identified in the field by birdwatchers. Measurements of wing length and bill length, taken at the time, meant that it could be identified as a male, using criteria described in this paper in Bird Study. 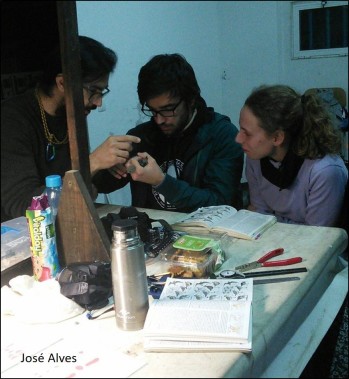 Almost all of the islandica Black-tailed Godwits breed in Iceland, with small numbers on the Faeroes, a handful on the Lofoten Islands of Norway and an occasional breeding pair on a Scottish island. Jenny Gill and I saw BR-YGf in the west of Iceland in April 2016, as we checked for marked birds in a flock of 1100 birds, many of which were new arrivals. He was feeding in a newly-ploughed cereal field, that had been previously spread with pig-muck from the neighbouring industrial-scale piggery. We managed to look at 800 pairs of legs in that flock; there was another green-flagged bird from Portugal, two orange-flags from France, a bird from Ireland and three from England. 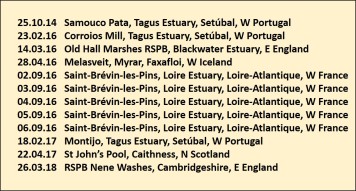 We have been checking flocks of Black-tailed Godwits arriving in Iceland for many years. One of the most significant recent outputs is a paper that explains that young birds, recruiting into the population, are driving the advancing arrival of the species into Iceland in spring. The results are summarised in this blog: Why is spring migration getting earlier?

Most of the Icelandic Black-tailed Godwits that winter in Portugal stop off to moult en route in autumn. We see some of these birds in the UK but BR-YGf is one that, from the sightings in September 2016, probably moults into winter plumage in France. Moulting is an energetically expensive process; birds that are mid-moult don’t usually migrate so these autumn staging sites are very important to the flocks that use them. When first caught in Portugal, in late October 2014, BR-YGf was in full winter plumage, probably having recently arrived from France. 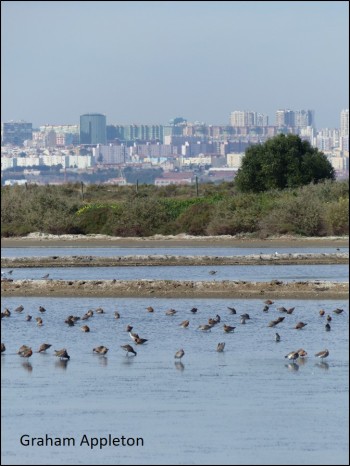 The Samouco salt-pans, where BR-YGf was ringed, with Lisbon in the background

Portugal is a warm place to spend the winter, with relatively long days and plenty of food – very different to the east coast of England, for instance. The only down-side is that Portugal is a long way from Iceland, which you might think leads to later return in the spring. Most Portuguese birds get around this problem by migrating in two legs, the first of which takes them to either the Netherlands or the British Isles. BR-YGf chooses the British option. This blog explains this migratory strategy: Overtaking on migration.

BR-YGf has been spotted in two springs since ringing. On 14 March 2016 he was seen at Old Hall Marshes in Essex by Steve Hunting and on 26 March 2018 he was seen by the Project Godwit team on the Nene Washes in Cambridgeshire. Mark Whiffin and colleagues were looking for limosa subspecies godwits, newly returned from Africa to breed, but their birds were outnumbered by large flocks of islandica, fattening up for the trip north. There’s more about the differences between the two subspecies in Godwits in, godwits out: springtime on the Washes with some hints on distinguishing which subspecies is which.

Portuguese birds, on an earlier migratory schedule, tend to be further ahead, in terms of moult, standing out in their red finery against the greyer local birds, some of which will travel to Iceland up to four weeks later. You can read more about the spring moult in this WaderTales blog: Spring moult in Black-tailed Godwits. Did you know that waders smell different in summer plumage?

BR-YGf has been following a well-used migration route: breed in Iceland, moult in France, winter in Portugal, spring in England, back to Iceland and repeat, for perhaps twenty or more years. What was he doing in Caithness, in the very far north of Scotland on 22 April 2017? 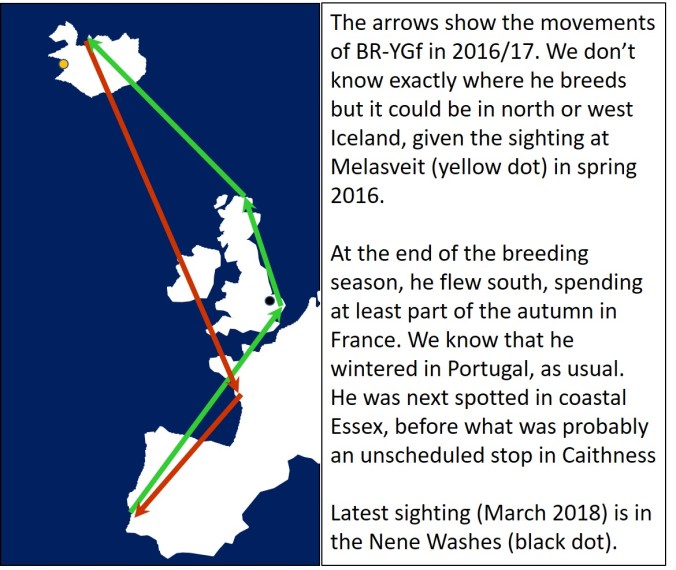 Although the average timing of arrival of individual godwits in Iceland has not changed, the small amount of annual variation in their timings may be related to the weather they encounter en route. In the spring of 2017, we were in Iceland waiting for birds to turn up. The weather was lovely – if cold – but northerly winds appeared to bring a brief halt to most migration. In our two-week stay we saw only 28 colour-ringed Black-tailed Godwits; not quite as bad as the spring of 2013, when winter returned to Europe in April, but close.

On 22 April 2017, BR-YGf was in a flock of Black-tailed Godwits that took a break from their northwards migration at St John’s Pool in Caithness, on the north coast of Scotland. Here it was photographed by Karen Munro.

In some years, Black-tailed Godwits, and other waders making the trip to Iceland, may get part way across the Atlantic and have to turn back or they may reach the north of Scotland or the Western Isles and stop. Colour-ring sightings alert colour-ring coordinators to these events, as presented in the blog: Waiting for the wind. 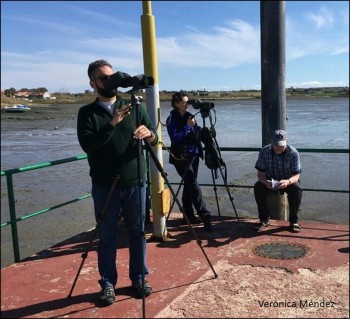 Looking for Black-tailed Godwits in Moita (Portugal) – José Alves, Jenny Gill and me

Thousands of birdwatchers have contributed to the studies of Icelandic Black-tailed Godwits. Every sighting is valuable, especially repeat records from the same site. This WaderTales blog tells the stories of some of the birdwatchers who contribute their sightings to these projects: Godwits and Godwiteers.

Please report any colour-ringed Black-tailed Godwits to j.gill@uea.ac.uk and she will forward them to the appropriate coordinator as necessary. Thank you!

BR-YGf spent at least 12 days in Alresford Creek, on the Colne Estuary, in Essex in April 2019.

The Tagus Estuary wintering area used by BR-YGf is now under threat, thanks to a planned airport in the heart of this Ramsar site. Please read more here.

4 thoughts on “Just one Black-tailed Godwit”