Red-listed Curlews, Scottish Oystercatchers, a boom in Black-tailed Godwits and the need for safe roost sites. Here’s a selection of WaderTales blogs that may appeal to counters who contribute to the UK Wetland Bird Survey (WeBS) and other birdwatchers who like waders/shorebirds.

It’s over 70 years since UK birdwatchers started to count waders and waterfowl and there are now over 3000 registered Wetland Bird Survey volunteers.

The work that volunteers do to chart the rises and falls of species as diverse as Redshanks and Whooper Swans provides a unique insight into the fortunes of our wintering waterbirds. As a tribute to the people behind the binoculars and telescopes, a few WaderTales articles that use WeBS data are highlighted below. Click on the links in bold if you want to read a particular story. Link to latest WeBS report. 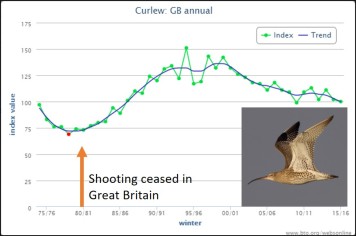 WeBS counts for Curlew in Great Britain between 1974 and 2016

In the blog Is the Curlew really near-threatened? WeBS counts are used to show how numbers have changed over the decades. There might have been a boost in numbers when Curlew came off the hunting quarry list in Great Britain in 1981 but declines in the last 15 years reflect issues birds face in the breeding season in many parts of their European range.

This blog discusses how much the 1980 to 1995 recovery in winter numbers can be attributed to hunting – After the hunting stopped.

Internationally, Eurasian Curlews are classified as near-threatened and in the UK they are now red listed. WeBS counts in Northern Ireland, alongside I-WeBS counts in the Republic, were successfully used to argue for the cessation of shooting across the island of Ireland in 2012. 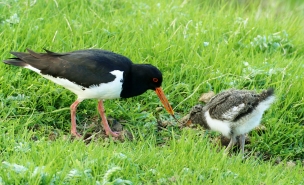 Oystercatchers are unusual, amongst waders, in that they feed their young

Surely the Oystercatcher is one wader species that we don’t need to worry about? Although the blog Oystercatcher: from shingle beach to roof-top leads with nesting behaviour, WeBS counts are used to illustrate regional trends in different parts of the United Kingdom. In Scotland, there is concern about poor breeding success, while in parts of Wales and England, WeBS counts may provide a way of measuring the population-level effects of cockle fishing and diseases affecting shellfish.

WeBS counts were used to explain what happened to the Oystercatchers that winter in South Wales when cockle numbers collapsed. One of the key messages from the study is that it is really important to protect networks of sites, to give waders alternative feeding sites when conditions change. See When Oystercatchers can’t find food. 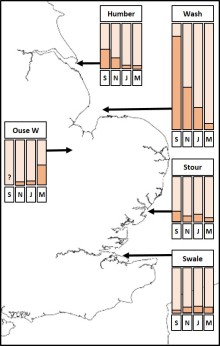 The annual WeBS report highlights the months in which counts are at their highest in different estuaries. For Knot, for instance, the highest counts on the Wash are in September, in other east-coast estuaries and on the Dee the peak is in December, whilst further north, in Morecambe Bay and the Solway, top numbers occur in January and February.

In Godwits & Godwiteers, which focuses on the superb work of observers who track the movements of colour-ringed Black-tailed Godwits, WeBS counts from east coast estuaries and the Ouse Washes illustrate the move inland that occurs as the winter progresses. 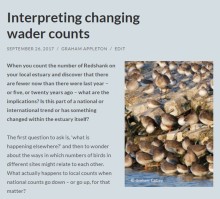 Groups of WeBS counters who cover local estuaries will be the first to notice changes in the numbers of the key species that use their own sites. If the number of Dunlin drops, is that a local phenomenon or part of a national picture? Is there always a strong link between national declines (or increases) and site-based counts? Interpreting changing wader counts provides some answers. It emphasises just how reluctant waders are to change wintering sites between years. 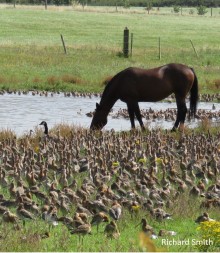 Every WeBS counter will appreciate the value of a safe (undisturbed) roosting site, whether this be used by waders or by ducks and geese. In A place to roost, WeBS counts for Black-tailed Godwits are used to assess the national and international importance of an individual roosting site in northwest England. The main thread, however, is about the energy expenditure associated with sleeping (not very much) and travelling to and from a safe roost site (lots). An interesting add-on is the story of what happened to Cardiff’s Redshanks when the estuary was turned into a lake.

If adult birds don’t change their winter homes then increases in local populations may well reflect good breeding years for wader species. 2017 was a good year for several species that breed in Iceland, particularly Black-tailed Godwits. 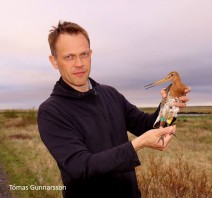 A great summer for Iceland’s waders puts the year’s productivity into context and gives an update on wader research that is being undertaken by the South Iceland Research Centre (University of Iceland), the University of East Anglia (UK) and the University of Aveiro (Portugal). If you have ever seen a colour-ringed Black-tailed Godwit, Ringed Plover, Oystercatcher or Whimbrel you may well find this interesting.

On the open shore 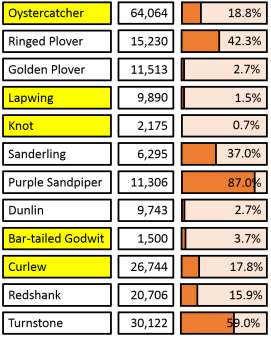 The blog News & Oystercatchers was written to promote the Non-estuarine Waterbird Survey of 2015/16, or NEWS-III. There are a lot of waders on the shorelines that link the estuaries that are covered for WeBS and, every few years, volunteers are asked to count these birds. In NEWS-II (2006/07), it was estimated that 87% of Purple Sandpipers were to be found on the open shore (see table) with high numbers of several other species.

There’s an assessment of the results from NEWS-III in Waders on the Coast.

The UK holds hugely important numbers of wintering waders. This is emphasised in the blog UK Waders: “Into the Red”. There will be no surprise that Curlew is on the list but would Ringed Plover be on your ‘red list’? Dunlin and Purple Sandpiper are both recent additions, on the back of the NEWS-III counts.

New and increased threats (an addition in Nov 2022)

Diseases, changes in habitat quality and pressure from developers are not new threats to the UK’s waders but, after a period of relative calm, there are several reasons to be worried.

Many more blogs to choose from

There are over 130 WaderTales blogs to choose from in this list. Five of these articles might be of particular interest to WeBS counters: 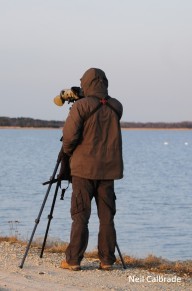 I use WeBS data a lot – in my blogs and in articles – and I appreciate the tremendous value of data collected each month by thousands of contributors. They monitor the condition of their local patches and have directly contributed to local, national and international reviews of the conservation status of wintering waterbirds. To every current and past WeBS counter – ‘thank you!’

There’s a (large) selection of papers using WeBS data here, on the BTO website. The Wetland Bird Survey is run by the BTO, in partnership with RSPB and JNCC (which acts on behalf of NE, NRW, SNH & DAERA), and in association with WWT.