In Iceland, young trend-setting Black-tailed Godwits are changing the timing of spring migration

Flocks of up to 5000 Black-tailed Godwits arrive in Alftafjordur (East Iceland) in spring: Tómas Gunnarsson

In recent years, earlier arrival of spring migrants has been widely reported in birds as diverse as swallows and waders but it’s not a universal trend; species such as British Cuckoos and Icelandic Whimbrels have not changed their arrival dates.  Interestingly, many of the species that have not advanced timing tend to be those that are declining.  By thinking about the mechanisms that enable some species to take advantage of earlier spring warming it might be possible to explain how timings and population changes may be linked. 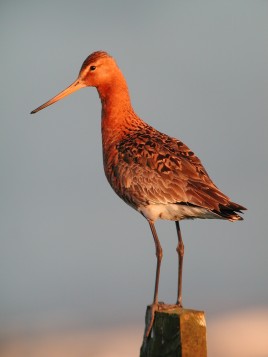 The simplest way for spring migration to advance would be for individual birds to change their arrival dates, arriving earlier now (either because they have departed earlier or migrated faster) than they did in previous years.  These changes could be facilitated by changes to weather conditions before, during or after migration.  In general, the arrival of short-distance migrant species has advanced more than long-distance species, which has led to suggestions that individual birds are able to assess conditions on their breeding grounds from afar, and to ‘fine-tune’ arrival accordingly. This could explain why long-distance migrants seem less well able to change their schedules than species which have less far to travel. 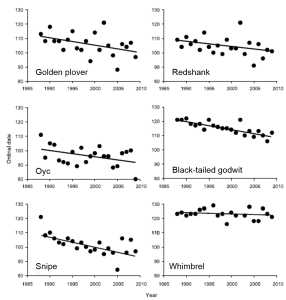 Figure 1: Changes in first spring arrival dates of six species of waders in southern Iceland from 1988 to 2009 (reproduced from Gunnarsson & Tómasson 2011)

This pattern of advances in arrival dates, and greater advances in short-distance migrants is seen in birds arriving into Iceland each spring (Gunnarsson & Tómasson).   By monitoring the first dates of a range of migratory breeding species to the area around Laugarás, an inland village in southern Iceland, over the period 1988 to 2009, Tómas Gunnarson and Gunnar Tómasson showed that species which spend the winter further south than France showed no change in arrival, whilst those from further north in Europe were returning earlier.  The southern group included the only wader in the Gunnarsson & Tómasson study which uses this migration strategy, Whimbrel (see diagram).

GL-YX on a windy day in western Iceland. He has been seen in eleven years. Despite the vagaries of spring weather, his arrival dates have only been spread over nine days (standard deviation 3.5 days) and have not advanced over the period 2003-2015

One of the species that has advanced spring arrival (by about two weeks in the last two decades) is the Black-tailed godwit.  Since 2000, we have been recording arrival dates of individually colour-ringed godwits into coastal Iceland – giving us the opportunity to assess whether individuals have indeed brought forward their time of arrival.  By making regular visits to the same sites we have discovered that the dates when we first come across individuals are remarkably consistent.  Although the arrival of the whole population is spread over a five or six week period, the window in which a specific Black-tailed Godwit appears is generally predictable, whether he or she is a bird that we tend to first see in mid-April or mid-May.  There are annual differences, of course, which appear to be linked to periods of adverse weather during the period of the sea-crossing (Gunnarsson et al 2006), from departure points in The Netherlands, The UK Ireland, France and Portugal, but there is no significant trend.

Dates of spring arrival into Iceland of 54 individually marked black-tailed godwits recorded on arrival in between 4 and 8 years, from 1999 to 2012 (reproduced from Gill et al. 2014). Whether an individual arrives early (left-hand birds) or late (right), the sighting dates for each bird are highly consistent.

Although the arrival date for the population has been advancing at ~0.8 days per year (Gunnarsson & Tómasson 2011), there has been no trend in individual arrival dates (not significantly different to zero days per year); Gill et al. 2014.

Most of the Black-tailed Godwit chicks were ringed by groups of volunteers led by Pete Potts and Ruth Croger (Photo: Tómas Gunnarsson)

If individuals are consistent in arrival but the population is advancing, the advance must presumably result from new birds recruiting into the population being earlier-arrivers than recruits from previous years?  Fortunately, there is a second long-running set of data that’s available to answer this question, in a large part because of the efforts of Pete Potts and Ruth Croger of Farlington Ringing Group.  In the period 1999 to 2014, they organised teams of volunteers to ring Black-tailed Godwit chicks in Iceland, with the support of the Icelandic Natural History Museum.  Significant contributions to the total of over 350 colour-ringed chicks were also made by Tómas Gunnarsson and José Alves, while researching the breeding ecology of Black-tailed Godwits for the Universities of East Anglia and Iceland. 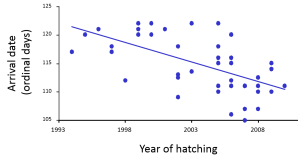 Dates of spring arrival into Iceland of 46 individuals hatched in different years and subsequently recorded on spring arrival (reproduced from Gill et al. 2014)

Wader chick mortality is quite high and there are further losses in the eighteen-month period between autumn departure from Iceland and the first return trip, eighteen months later, so it was wonderful to have a sufficiently big cohort of marked recruits to look at patterns and trends.  For this study, arrival dates for 46 individuals of known hatch year were available for analysis.  As can be seen from the graph, arrival dates of new recruits have been getting earlier, with birds hatched in the last decade arrive around two weeks earlier than individuals hatched in the 1990s.

There are several reasons why recent recruits may be arriving earlier than in previous years, but the most likely is that this is a knock-on effect of advances in godwit laying dates that have occurred in recent decades.  Icelandic godwits nest earlier in warmer springs, and the frequency of warmer springs has increased.  Early fledging may benefit new recruits, by increasing the time available for them to migrate south, locate a good winter site and be in condition to return early when they recruit into the breeding population (Alves et al. 2013 http://www.esajournals.org/doi/abs/10.1890/12-0737.1  http://dx.doi.org/10.1890/12-0737.1). As their arrival date will be consistent thereafter, the overall timing of arrival of the population will advance.

Will this young Black-tailed Godwit contribute to our understanding of the changing timing of migration? (Photo: Tómas Gunnarsson)

Many other studies of different species in which individuals are tracked during migration are showing similar levels of consistency in individual timing of migration.  What then is causing the variation among species in rates of advance?  Long-distance migrants typically arrive later on the breeding grounds and breed quite soon after arrival, while short-distance migrants can have quite large time gaps between arrival and laying, depending on conditions for breeding. Short-distance migrants therefore have more capacity to advance laying dates (because they are on the breeding grounds waiting for suitable conditions), while long-distance migrants, such as Whimbrels in Iceland, arrive later and so cannot breed earlier even in a warmer year. Advances in spring arrival dates may therefore result from advances in laying dates and associated benefits of early fledging for recruits, and lack of advance in long-distance migrants may be a consequence of arriving late and hence being unable to take advantage of early, warm spring conditions.

In the Icelandic subspecies of Black-tailed Godwit, which is expanding in both number and distribution, it is clear that young recruits to the breeding population are driving the advance in timing of migration.  We only know this because of the long-term programme of chick ringing by volunteers and because we have been able to record the timing of individual birds’ migratory activities over a large number of years.  Funding for this work has been provided by the volunteers themselves, NERC , Icelandic Research Council  and EU TMR.

This blog is based upon research presented in the following open access paper:

Please send reports of colour-ringed Black-tailed Godwits to Jenny Gill (j.gill@uea.ac.uk). She will reply with full details of any birds ringed on the Wash or forward your e-mail to colleagues running other schemes.

15 thoughts on “Why is spring migration getting earlier?”