An important paper by Colin Studds and colleagues shines a spotlight on the Yellow Sea, where waders/shorebirds have lost vast areas of feeding habitat during China’s economic boom.

Waders make some of the most remarkable migratory journeys in the bird world and many rely on a few key estuaries to refuel, especially as they head north to breed. For hundreds of thousands of waders on the East Asian-Australasian Flyway, from tiny Red-necked Stints to Far Eastern Curlews, the Yellow Sea is absolutely crucial. A new paper by Colin Studds and sixteen colleagues collates the available information on current population trends of waders using this flyway and shows how these relate to the reliance of each species on the Yellow Sea. The more a species relies on disappearing mudflats, between China and the Korean peninsular, the faster it is declining.

As Colin Studds says: “Scientists have long believed that loss of these rest stops could be related to the declines, but there was no smoking gun.” Now there is. The new paper is published in Nature Communications. 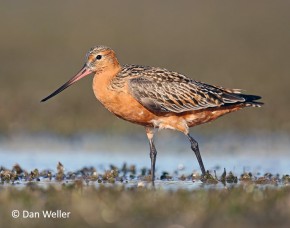 Over the last twenty years, satellite tracking has revealed the amazing migratory journeys of shorebirds on the East Asian-Australasian Flyway. The most famous wader ever must be E7, which was the first Bar-tailed Godwit to be tracked from Alaska to New Zealand in one continuous journey, covering the 11,600 km journey in 9 days. When E7 flew from New Zealand to the Yellow Sea in the next spring, on the first leg of its return journey, that was another flight of 10,200 km in 7 days.

It’s not just Bar-tailed Godwits that link New Zealand and Australia to the Yellow Sea. Colour-ringing has established that at least 10 wader species use this staging area during their northward migration in spring. 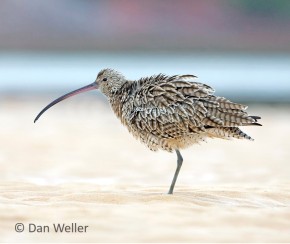 Far Eastern Curlew is one of the fastest declining species on the flyway. There is a WaderTales blog about the global plight of members of the curlew/godwit family here.

Annual counts of waders have been taking place in sites across Australia and New Zealand since the early 1980s. Colin Studds and his colleagues use data collected during the non-breeding seasons between 1993 and 2012 from 43 of these key locations. The analysis relies on the work of scores of volunteer birdwatchers who undertake these counts during the months from October through to March. The count data used in this paper focused on December and January, when there is least likelihood of within-season movement. Some of the declines have been dramatic; in twenty years, the number of Far Eastern Curlew fell by about 60%, with a 75% drop in Curlew Sandpipers, just to give two examples.

If numbers are going down, then that suggests that these waders are failing to breed as successfully as they once did or that the adults themselves are dying in larger numbers than used to be the case – or both. The fact that no changes have been observed in the proportion of juveniles in flocks strongly suggests that survival rate is the key demographic parameter upon which to focus when trying to understand population declines.

Colour-ring observations not only establish migratory links, they also provide the raw data from which annual survival rates can be estimated. A typical annual survival rate for an adult wader is between around 70% and 90%. If the survival rate is 90%, and 50 female waders lay an average of 4 eggs during a breeding season, then only 10 of the chicks need to hatch and reach breeding age for the population to remain stable. If that same level of productivity occurred but the survival rate for adults changes to 80%, then the chance of an adult dying in any given year doubles and the population will drop by half in just six years. This illustrates that a fall in survival of just 10% can have serious implications for the population trajectory. 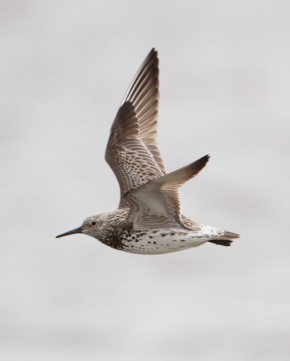 The counts of non-breeding waders in Australia suggested that there were major changes in numbers for several species between 2010 and 2012. When Theunis Piersma and colleagues analysed the colour-ring sightings for populations of three species that spend the non-breeding season in Australia and breed in eastern Siberia – Bar-tailed Godwit, Great Knot and Red Knot – they discovered a decline in annual survival of between 18% and 19% in just two years. Their paper raised serous alarm bells. All three populations spend time in the Yellow Sea on their spring migration and Theunis argued that rapid habitat loss in the Yellow Sea was the most likely explanation of reduced summer survival, with dire (but uncertain) forecasts for the future of these flyway populations.

Reliance on the Yellow Sea 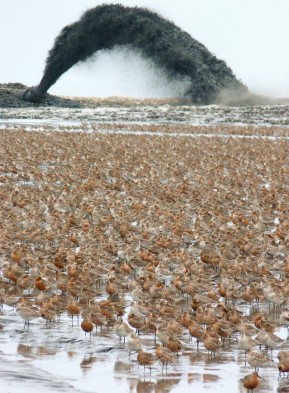 Bar-tailed Godwits watch on as their habitat disappears (Dave Melville)

It is estimated that nearly 30% of Yellow Sea tidal mudflats have been lost to coastal development in the last 30 years and China is forecast to undergo up to 14% expansion in urban development over the next 15 years, much of it concentrated on the margins of the Yellow Sea. Within the remaining mudflats, there have been increases in algal blooms, heavy metal deposits and areas of invasive Spartina alterniflora, the last of which reduces mudflat availability. All of these changes have the potential to put huge pressures on waders that are fattening up for the last leg of their migratory journey to arctic breeding grounds.

Previous work focused on waders in Japan, by Tatsuya Amano and colleagues, had shown that wader species relying on the Yellow Sea while on migration are declining more quickly than those that are not but Japan is on the migratory flyway so this result could have been confounded by changes in migratory route. By using data from the the non-breeding season and looking at a wider range of species, Colin Studds and his colleagues have been able to link reliance on the Yellow Sea with the magnitude of population changes. 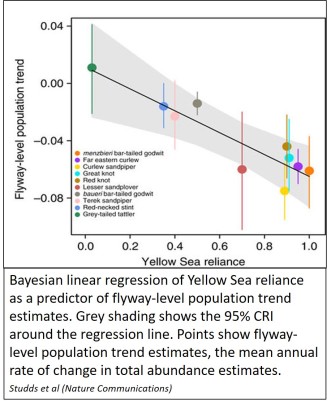 A key element of the new paper is the compilation of available data on flyway population sizes, migratory connectivity and Yellow Sea count data, in order to estimate the proportion of each species that rely upon the Yellow Sea. At the lowest end is the Grey-tailed Tattler, only 3% of which use the area, whilst 100% of the menzbieri subspecies of Bar-tailed Godwit rely on the Yellow Sea. When reliance is plotted against annual population trend the fit is remarkable. Interestingly, there are two very similar subspecies in the analysis; whilst the menzbieri Bar-tailed Godwits are estimated to have been declining by 6.1% per annum, the baueri subspecies, which is only 50% reliant on the Yellow Sea, has ‘only’ been declining at 1.4% per annum. 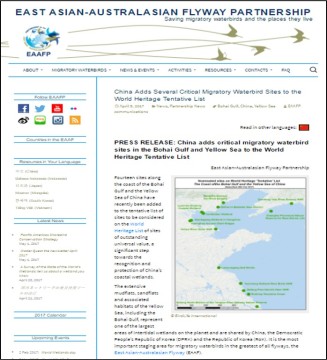 This paper provides further evidence of the huge importance of the Yellow Sea. To quote Richard Fuller, the team leader of this research “Every country along the migration route of these birds must protect habitat and reduce hunting to prevent the birds declining further or even going extinct.”  Issues facing birds that use the flyway are being successfully highlighted by the East Asian-Australian Flyway Partnership. Australia has signed agreements with China, Korea and Japan to protect migratory birds, and China and South Korea have recently begun the process of listing parts of the Yellow Sea as World Heritage Sites. As well as development controls, a range of mitigation actions are discussed in the paper – let’s hope that they are pursued with enthusiasm. 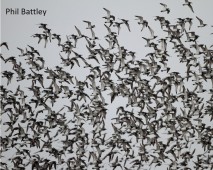 The results of this study have been published as Rapid population decline in migratory shorebirds relying on Yellow Sea tidal mudflats as stopover sites (Nature Communications 8:14895 | DOI: 10.1038/ncomms14895)