It has been said that Black-tailed Godwits are the laziest birds in the world, usually in a frustrated tone while waiting for a marked bird to wake up and reveal the rest of its colour rings. Roosting is not laziness, however; it’s an important resource conservation strategy in the daily balance of energy inputs and outputs.

When Black-tailed Godwits are feeding in tidal systems they have a limited amount of time each day to access the shellfish and worms that make up their diet. These foods are unavailable over the high-tide period, and sometimes in the lull between the ebb and flood, so birds conserve energy by gathering together at roosts. They seek out sites that are safe and sheltered, and then go to sleep – often for several hours if undisturbed. Theunis Piersma and colleagues have shown that sleep is the most energy efficient form of activity for shorebirds.

The details can be found here:

What does this mean for Black-tailed Godwit in UK conditions?

Waders often roost in mixed flocks. These birds are resting on an Icelandic beach after crossing the Atlantic

Although the facts, figures and conclusions listed above relate to Red Knot and Great Knot, the authors point out that they gather in mixed roosts with other species to which similar decision-making might apply. The Australian studies took place in very hot conditions but many of the factors influencing roosting site choice are likely to also apply to our cold and wind-swept estuaries in NW Europe. For instance, a study of Knot on the Dee Estuary by Mitchell et al in England estimated that costs of commuting to roosts could account for 14% of daily energy expenditure. 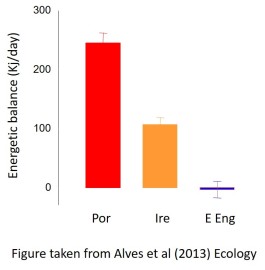 Energetic constraints are likely to present different issues for arctic waders that spend the non-breeding season in the northern hemisphere than for ones that choose to cross the equator, and experience warmer conditions and heat stress. Even within Europe, the energetic balances that waders can experience on different estuaries can vary widely. In their 2013 Ecology paper on Black-tailed Godwit energetics, Costs, benefits, and fitness consequences of different migratory strategies  José Alves and colleagues showed that mild weather and abundant food supplies result in a positive energy balance for godwits wintering on the Tagus estuary in Portugal and, to a lesser extent, the estuaries of south Ireland. In east England estuaries, however, the costs of keeping warm can sometimes exceed the energy available from the food supplies (see figure). In such circumstances, an undisturbed roost, located as close as possible to feeding areas may well be especially important.

Although it is very hard to demonstrate population-level consequences of removing roosting sites, we have some clues about how birds respond to removal of roosts and foraging sites, from impact-assessment work carried out by the BTO on Redshank in the Cardiff Bay area. When this bay was closed and flooded for commercial development, Redshanks lost both feeding areas and traditional roosting sites. Tracking of colour-ringed Redshanks showed that displaced birds moved to new feeding areas and roost sites up to 19 km away, but mostly stayed close-by, on the mudflats of the River Rhymney. Cannon-net catches of these flocks provided measurements of bird mass before and after the closure of the Bay, which revealed that adult Redshank from the Bay had difficulty in maintaining body condition in the first winter following closure and that their survival rates in subsequent winters remained lower than birds that had previously been settled in the Rhymney area. Three papers are essential reading for anyone interested in the consequences of displacements caused by development projects.

A key point of both the Knot work in Australia and the Redshank impact assessment study in Wales is the energetic costs to individuals that can result from the disruption caused by the loss of roosting or foraging sites. Indeed, individual waders may even have favoured locations within roosts that they consistently use. For example, at Gilroy Nature Park, a shallow pool where up to 3500 of the Black-tailed Godwits that feed on the Dee estuary in NW England regularly gather to roost, observers of colour-ringed birds have noticed that marked individual godwits (eg YN-RX pictured here) are often seen in exactly the same place within the pool and flock.  Losing a roosting site of which individuals have such detailed knowledge, and forcing flocks of birds to find alternative roosting locations, may therefore have bigger consequences than just the kilometres covered.

The total number of Icelandic Black-tailed godwits was estimated to be 47,000 in 2004, a figure that is likely to be closer to 60,000 now as the population has continued to grow. This means that a flock of 3,000 birds represents about 5% of the total of the entire breeding population. There is a small number of sites across the United Kingdom that hold these sorts of numbers at different stages of the year. According to the latest figures from the Wetland Bird Survey, numbers on the Wash and Humber estuaries in east England peak at averages of 8198 and 3413 in September, there are 4339 Black-tailed Godwits on the Welsh side of the Dee estuary in October and 5909 on the English side in November. The mean count on the Thames also peaks in November (5883). As the winter progresses, numbers on the nearby Ribble estuary rise to a mean of 4234 in January, there is a mean maximum of 3236 on the Washes in February and 3191 on the Blackwater in March. Although all of these sites are important to Icelandic Black-tailed Godwits throughout the non-breeding period, the different timing of peak counts illustrates the reliance of Icelandic birds on a network of sites. To get a feel for the range of strategies used by individual birds, see Godwits and Godwiteers.

While estuarine feeding areas across Europe are well safeguarded, through the network of Special Protection Areas, roost sites are not always as well served, especially if birds spend the high tide period on sites outside the SPA boundary of their foraging areas, such as the freshwater pool at Gilroy Nature Reserve, inland of the Dee Estuary. Some roost sites such as North Killingholme Haven Pits on the Humber have been included within a designated SPA formed by the adjacent mudflats but others, such as Gilroy, are discrete sites outside the SPA. Maintaining the wader populations that forage on our estuarine mudflats may depend upon our capacity to protect their safe roosting sites, even if they are not currently designated.