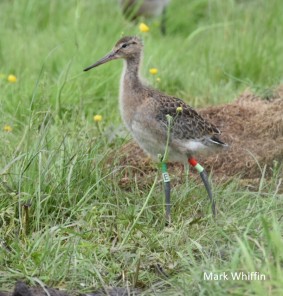 As I write this, the Scientific & Technical Advisory Group of Project Godwit is meeting to review progress. They will be learning about the success of the project, which has three aims: to create the best possible habitat for the small (and threatened) population of Limosa Black-tailed Godwits breeding in the East Anglian washes, to provide protection for nesting pairs and to augment chick-production using head-starting. Head-starting involves removing first clutches and hand-rearing chicks before releasing them back to the wild. All of this is set within a rigorous scientific framework, so that the efficacy of head-starting and nest-protection can be carefully evaluated.

What a year it has been! When I wrote Special Black-tailed Godwits last year, I finished by saying, “Imagine how exciting it will be if one of this year’s head-started birds is found breeding in the Nene or Ouse Washes next year”. Amazingly, nine of the 26 head-started birds from 2017 were back this year and two females definitely had nests, with one fledging a chick, and a further two paired together are suspected to have attempted to nest. From data shared with me by Roos Kentie, this return-rate is comparable to wild-breeding Limosa Black-tailed Godwits in her Dutch study-area.

Where did the chicks go?

The left-hand map below shows the finding locations of chicks in the period June to September 2017, before they headed south for the winter. There had been a major publicity campaign, asking birdwatchers to look out for these special godwits in East Anglia. The Project Godwit team were pleased to receive news of six birds in Norfolk, Suffolk and Essex. The bird that turned up at Steart Marshes, in Somerset, came as more of a surprise.

Most limosa Black-tailed Godwits spend the winter in Africa, south of the Sahara, but an increasing number now stay in Portugal and Spain. There is a WaderTales blog about some of the costs and benefits of this new strategy: Should Black-tailed Godwits cross the Sahara? There were no winter sightings of the head-started birds but several popped up again in the spring of 2018, as shown in the right-hand map above. Four birds were seen in Portugal, two in France and one in Belgium. The Belgian sighting was the only unexpected sighting, as discussed in Site-fidelity in Black-tailed Godwits.

What about ‘wild’ birds?

RSPB scientists have been using colour-rings to follow the movements of Nene and Ouse Washes Black-tailed Godwits since 1999. As you can see, from the map alongside, the pattern of sightings is very similar to the one for the head-started birds, the only difference being a couple of winter reports in Senegal of the same individual and a bird that spends each winter in Portugal. August and September sightings have been in East Anglia, Spain and Portugal, with February and March sightings in Portugal, Spain, France and East Anglia.

As Black-tailed Godwits move north in February and March, they mix with birds of the islandica race which are preparing for the journey to Iceland. There’s a blog about the two subspecies here: Godwits in, Godwits out: Spring-time on the Washes.

One of the outstanding questions is ‘Do head-started birds migrate in same way and spend the winter in the same places as birds that were raised naturally’. Given that released chicks have generally behaved just like other youngsters, they probably do, but it would be nice to have proof. To provide an answer, geolocators have been attached to the flag-type ring on each of 22 head-started chicks and 20 wild godwits. When they return (and if they can be caught on their nests) these geolocators will be taken off and the data will be downloaded. Keep an eye on the Project Godwit website for new information. 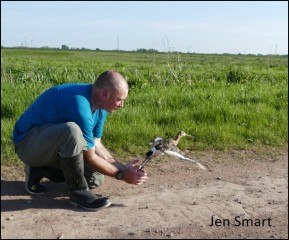 Geolocators do not only reveal the final destinations of migratory birds, they also provide information about stop-over sites. Given that the limosa species is in serious decline (there’s a blog about the 75% drop in the Dutch population), it is important to understand the habitat requirements and timing of movements during migration. Two adult birds from the Nene have been tracked using geolocators, both of which spent the winter in Senegal. 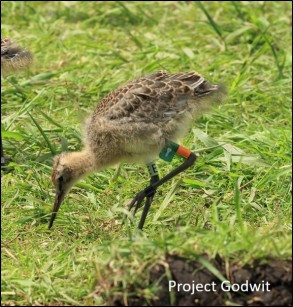 ‘Morgan’ is one of the class of 2018. This chick has already been seen in Hampshire and hopefully the geolocator (attached to green flag) will reveal where it spends the winter.

And so to the second year… As you can read here, 2018 was a strange breeding season. It started with a flood and ended with a drought. A total of 55 eggs were taken from the Nene Washes, including early eggs that had to be rescued from a waterlogged wheat field. Despite the muddy state of many of the eggs, 38 chicks were reared successfully and the first five were spotted away from the Welney and Nene release areas before the end of July – four on the North Norfolk coast and one at Titchfield Haven, in Hampshire.

These sightings and all the others that will hopefully be reported in August and September, are really valuable. They confirm which birds have survived their first few weeks and months in the wild and give a good clue as to which birds the team might see next spring. If you see one of the young birds, which carry a lime E ring on the right leg, please report it via this website.

Project Godwit is a partnership between RSPB and WWT, with major funding from the EU Life Nature Programme, The HSBC 150th Anniversary Fund, Natural England, the Heritage Lottery Fund, through the Back from the Brink Programme and Leica UK.