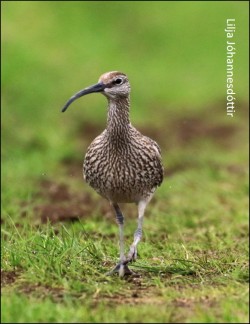 Much has been written about the negative impacts of agriculture on breeding birds – but farming can be good for some species. In Iceland, where high-input agriculture is relatively recent, breeding waders are commonly found in nutrient-rich environments that are associated with increased production. How can high breeding densities of waders be maintained, as farming continues to expand and intensification increases?

In her paper in Agriculture, Ecosystems & Environment Lilja Jóhannesdóttir investigates the distribution of breeding waders across landscapes with varying amounts of highly-cultivated fields and semi-natural areas. She discovers that, in some circumstances and at an appropriate level, adding cultivated land within a broader mosaic of habitats may benefit breeding waders. Is this a model system that provides clues as to how to design landscapes that can support sustainable breeding wader populations in other parts of the world?

The waders of Iceland

Much of Iceland’s upland interior is not suitable as farmland but there is still plenty of room for agricultural expansion. Only 7% of the area between sea level and an elevation of 200 m is currently under cultivation but it is estimated that it would be possible to increase this to 63% – an eight-fold extensification. Icelandic lowlands currently comprise a fine-scale mosaic of open semi-natural habitats and cultivated fields (primarily for silage production to feed animals), making most of the landscape much more heterogeneous than in countries with a longer history of commercial farming. 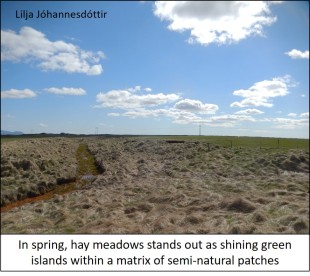 Given that farm production is predicted to increase, that farmers like breeding waders and that some intensively-managed fields can be attractive to waders, is it possible to design farmed landscapes that will work for birds and farmers?

Globally, the expansion and intensification of agriculture has altered landscapes and the associated homogenisation has greatly influenced bird abundance and reduced biodiversity. Populations of numerous species, particularly specialist species, have declined, as agriculture has expanded, while generalist species have often thrived in agricultural habitats.

There is no shortage of examples in which highly intensively managed farmland is shown to be bad for breeding waders. In the monoculture hay-meadows of the Netherlands, Black-tailed Godwit productivity is really low, for instance. These fields have been drained, fertilised and re-sown, in order to create easily-managed carpets of single-species grass that can be cut several times a year. There is more about this in this paper by Roos Kentie.

Although there are some areas of Iceland in which farming is quite intensive, there are many others where farmers have a lighter touch. For instance, nutrient-poor dwarf birch marshes may occasionally be grazed by sheep in the summer but these areas have never received applications of artificial fertiliser. At this end of the intensification continuum, increasing agricultural operations may have benefits for breeding waders. When a patch of rough grazing is ploughed and turned into a hay meadow, the addition of fertilisers can potentially increase soil fertility and create an attractive place for waders to feed. A hay meadow within a local area that is dominated by dwarf birch marsh could effectively increase the heterogeneity (& nutrient-richness via spill-over) of the local area, albeit in an artificial way. In the UK, Golden Plovers breeding on moorland are known to travel up to 7 km to feed on fertilised hayfields with high earthworm densities. This paper by James Pearce-Higgins & Derek Yalden in IBIS provides a nice example of how low intensity agriculture can provide resources for waders in the wider landscape.

Lilja’s work in the Southern Lowlands of Iceland focused upon understanding how agriculture influences breeding wader densities and how these relationships might influence future change. At its heart were counts of adult waders encountered along 200 transects (totalling over 100 kilometres) within semi-natural habitats, visited at several stages during the breeding seasons of 2011 and 2012.

As well as counting birds, Lilja categorised habitats within 500, 1000, 1500 and 2500 metres of the transects, which she called buffer area in the paper. Interestingly, and usefully for later analyses, the distribution of different habitat types is pretty uniform across these scales, in this part of Iceland, with little substantial difference according to elevation. In the diagram below, the 200 transects (a) have been split between those below 50 m above sea level (b) and those higher than 50 m (c).

To fulfill the various demands of parents and their offspring, waders need diverse resources on or near their territory. An adult can feed a kilometre or more away from its nest, between incubation bouts, and chicks are mobile from an early age. Tagging has shown that young Black-tailed Godwits can move up to 3 km in the first five days of life, just to give one example. In this open landscape, breeding success is likely to be a function of habitat availability at a broad scale. This is explored in a WaderTales blog about nesting Whimbrel.

Using data collected from these 200 lowland transects, Lilja was able to establish relationships between breeding wader densities and the amount of cultivated land and wetland in the surrounding landscape. These two habitat types were considered because future agricultural expansion is likely to take place on drained wetlands that have high conservation value. In her analyses she assessed the extent to which the amount of cultivated land in the surrounding landscape affects wader densities on semi-natural land, and then considered the potential effects of future agricultural expansion on wader populations. There was substantial variation in the density of all of the six most common wader species recorded on the transects, ranging from 0 to 284 birds/km2.

Lilja found that wader densities in semi-natural habitats were consistently greater when the surrounding landscapes had more wetland, at scales ranging from 500 m to 2500 m, indicating the importance of wetland availability in the local neighbourhood. However, the effects of cultivated land in the surrounding landscape varied with fertility and landscape structure, which was largely defined by altitude.

The relationships between the areas of wetland and agriculture in the surrounding landscape and the density of waders vary between species, as you can read in some detail in the paper. A few highlights are:

Changes in Icelandic landscapes are to be expected in the coming years, as most farmers intend to increase their areas of cultivated land. This expansion will inevitably have impacts upon the internationally important breeding wader populations of Iceland but the level of such impact will depend on where the expansion will occur. This paper shows that increases in the area of cultivated land at lower altitudes in Southern Iceland are more likely to result in declines in wader density than in less fertile areas, which are usually found at slightly higher altitudes (still under 200 m above sea level). An important next step will be to identify the landscape structures and scales of management that can continue to support high densities of breeding waders. 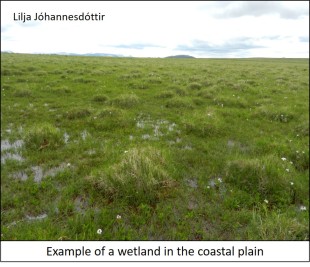 Given the international importance of Iceland as a home for breeding waders it would be nice to think that this paper can be used to develop national land management policies that can prevent the unintended loss of species such as Golden Plover and Snipe, which landowners value and wish to preserve. At the farm and community level, the paper highlights the key importance of maintaining the complex and heterogeneous landscapes of lowland Iceland, retaining as many as possible of the remaining wetland patches and pockets of semi-natural land within even the most intensive of farming areas.

The paper may well be of interest to conservationists who are struggling to reverse wader declines in other parts of the world. In Southern Iceland, where 7% of the land is being farmed relatively intensively within a fine scale mosaic of both wet and dry semi-natural habitats, it is possible to support hundreds of waders per square km across the wider countryside. Can this situation be replicated across large tracts of land in other countries?

This paper provides a useful reminder that the links between land use changes and biodiversity implications can be highly context-dependent. Further agricultural conversion of wetlands and rough grazing areas in the fertile low-lying areas of Iceland is likely to be detrimental for breeding waders, but such effects may be less apparent in less fertile, higher altitude areas. Here, the conversion of some land from rough-grazing to hay meadows may provide feeding opportunities off-territory for Dunlin, Golden Plover and Whimbrel. The scale at which the addition of cultivated areas is beneficial to breeding waders has yet to be determined.

This paper is published as: