Europe is losing 5000 Curlews every year. What can we all do to stop – or even slow down the decline?

If a patient presents with a problem, it’s the job of the health professional to work out the root cause, to come up with a treatment plan and to check that it works. That’s the process that is used for bird conservation – notice, diagnose, treat and monitor. Sometimes, however, the patient is in such a serious condition that you cannot wait for a full set of test results, you just have to try something. That’s the situation with Curlew in the United Kingdom; the losses are so rapid that people are already taking local action to try to increase chick numbers (see some links at the bottom).

This blog focuses on a paper, by Samantha Franks and colleagues from the BTO and RSPB, that tries to identify the primary factors associated with the species’ decline at a national scale. Unsurprisingly, the answers point to changes in ‘habitat’ and ‘predation’ but it’s worth looking at the detail.

The United Kingdom is one of the key breeding areas for Eurasian Curlew, accounting for an estimated 19-27% of the global population. Within the UK, breeding Curlew numbers have dropped by 48% in the last 20 years – earning the species the dubious distinction of red-listed status in 2015. We are responsible for a staggering estimated loss of 13.5% of the European population during this period.

There’s more about the national and international problems for Curlew in this blog (Is the Curlew really near-threatened?). Sadly, the Eurasian Curlew is not alone – almost every member of the Numeniini (curlews, godwits and Upland Sandpiper) is in trouble, as you can read here (Why are we losing our large waders?).

The aim of the new study by BTO and RSPB scientists is to use national figures to assess whether there is evidence to support or refute previous theories about the causes of Curlew declines. The paper starts with a thorough and fully-referenced overview of existing evidence for potential causes of the population change. At its heart is a discussion as to how management affects Curlews, through things like changes to upland grazing patterns and land-use modifications which may have had unintentionally positive effects on generalist predators. Changes to weather patterns provide additional challenges. The suggested drivers of the declines that have been observed and in some cases measured are summarised here. 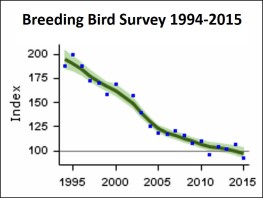 The paper uses data collected by thousands of volunteers who contribute to the Breeding Bird Survey (BBS), organised by the BTO in partnership with JNCC and RSPB. The team focused upon Curlew breeding distributions in Great Britain during the periods 1995-99 and 2007-11, separately. They then considered patterns of change between the two periods.

The following potential correlates of distribution and change were investigated:

So, how well did the patterns of change fit with the theories as to which factors might be causing the collapse of Curlew numbers? Let’s start with a couple of the strange findings from the 1995-99 period. It illustrates just how hard it is to interpret correlative relationships. Just because A and B happen at the same time, does it mean that A is actually causing B?

When the research team investigated links between Curlew abundance in 1995-99 and the variables that might explain the species’ distribution, they found that Curlews were associated with semi-natural grassland, heathland and bog, as one might expect. However, Curlew were also more abundant in areas with a greater amount of woodland in the landscape, albeit this being a relatively weak relationship . Given previous research by David Douglas et al in the Journal of Applied Ecology had shown a negative effect of woodland on Curlew abundance, this seemed strange. This unexpected association with woodland was reversed when data for 2007-11 were considered and when the changes between the two periods were analysed. The authors’ explanation is that tree planting prior to the 1995-99 surveys may have taken place in some Curlew breeding areas, that the trees were still becoming established and that the Curlews still present.  Whether these birds were successfully raising chicks we shall never know. 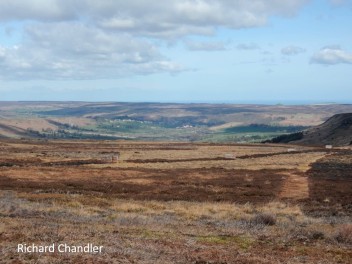 Another anomaly in this first period was that Curlew density was highest in areas with high crow abundance. This may look odd until you also consider the strong association between Curlew numbers and numbers of Red Grouse and Pheasant. Provide the right conditions for these ground-nesting species to flourish and you’re likely to draw in predators.

Fortunately, and thanks to the volunteers who collect Breeding Bird Survey data every year, the researchers were not constrained to one time period. They could also look at 2007-11 and changes in Curlew distribution in the intervening period. Anyone interested in the finer detail will want to read the whole paper but here are my take-home messages.

What to do for Curlews?

We cannot do much about climate impacts in the short term, and site protection is unlikely to reverse the national declines. The key things to focus on, according to the authors of this new paper, are “habitat restoration and reducing the negative impacts of predators”. Even if the details of the treatment plan have not been worked out, there appears to be a general diagnosis – there is not enough habitat of sufficient quality for Curlews to raise their chicks. While predator impacts may not have been the original cause of population declines, there is a broad consensus that reducing predator pressure is essential for successful species recovery.

So, we’ve noticed a decline, there is a diagnosis of the problem and there is a broadly accepted treatment plan of creating better habitat and reducing predator pressures. The next phase is to monitor what works, which is where national collaboration comes in. Curlews are not only found on nature reserves; they are ‘out there’ in land owned and managed by all sorts of people with a broad range of motivations, including farmers, shooting estates, statutory agencies and conservation charities. Single land-owners and local groups are working in partnerships to try to improve breeding habitat and reduce predation. What is working – and in which circumstances?

At the end of the new paper is a key section advocating “the need for the rapid establishment of intensive studies to identify the mechanistic drivers of the patterns observed here and to test potential conservation management interventions”. Ideally, these will look at issues such as:

In the absence of sufficient funding to conduct all these experiments as proper trials, it is to be hoped that the RSPB’s Trial Management Project and a new initiative by the Game & Wildlife Conservation Trust (links below) will enable local experiences to be shared in a national framework. Further collaboration is being encouraged through the UK and Ireland Curlew Action Group and a series of workshops organised through The Curlew Forum.

Links to local and collaborative initiatives in the UK and Ireland 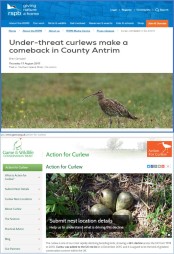 This list will be updated as and when I am notified of appropriate links.

The paper appeared in Bird Study, published by BTO, on 31 August 2017.

27 thoughts on “Curlews can’t wait for a treatment plan”