As July 2017 turned into August, the first juvenile Icelandic Black-tailed Godwits started to arrive in the UK – soon they were everywhere. Had this been a good year for waders and wader research in Iceland?

An increasing amount of wader research is taking place in Iceland, much of which is part of an international partnership between the South Iceland Research Centre (University of Iceland), the University of East Anglia (UK) and the University of Aveiro (Portugal). Although the main focus has been on Black-tailed Godwits, Whimbrels and Oystercatchers, there is a lot more to this collaboration.

The spring season started early for Verónica Méndez, who is studying the migratory decisions made by Iceland’s Oystercatchers. About one third of these birds stay in Iceland for the winter but most are thought to migrate to Ireland and western coasts of the UK. By looking for colour-ringed individuals in January she was pretty sure that she would be sampling resident birds. There’s a blog about this project here. At the same time, sightings of migratory birds were being reported from the UK and Ireland.

Since 2000, there have been annual spring surveys of arriving Black-tailed Godwits. Jenny Gill and I arrived on 13 April and started our survey routine of regular visits to estuaries, wetlands and stubble fields in south and west Iceland. Icelandic birdwatchers cover other sites in the east and south of Iceland. The dates of the arrivals of individual birds have already contributed to a paper about what is driving earlier spring migration of the species, which is written up in this blog.

In cold northerlies, migration from Ireland, the UK and mainland Europe was slow in 2017. This is something we have seen before and described in this blog about the appearance of large flocks in Scotland. A record number of Black-tailed Godwits – 2270 birds in total – were seen on the Scottish island of Tiree on 25 April 2017, including a minimum of 23 colour-ringed birds. We saw one of these birds four days later, fast asleep on a hay field near the south coast of Iceland.

The 2016/17 winter had been relatively warm and wet in Iceland and the ground was not frozen when waders returned from Europe. The Black-tailed Godwits did not stay for long on the estuaries before moving inland to breeding territories.

The Oystercatcher project got off to an early start. 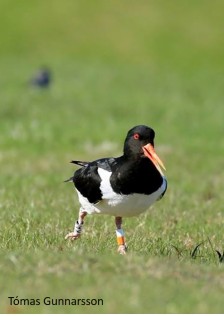 In collaboration with Sölvi R Vignisson, Ólafur Torfason and Guðmundur Örn Benediktsson, the team colour-ringed 177 new adults and 144 chicks in a range of sites around Iceland. This year’s adults have white rings with two letters on the left leg and two colour-rings on the right, whilst chicks have grey instead of white. A smaller number of youngsters ringed in 2016 have green rings with engraved letters and some adults from previous years have green flags.

As part of a study to try to understand the migratory behaviour of young Oystercatchers, José Alves & Verónica Méndez have fitted GPS/GSM transmitters to a small number of big chicks. Which birds will migrate and what determines the strategy? Two birds have already made what appear to be exploratory trips around southwest Iceland, before returning to their natal sites.

At the time of writing (26 August), none of the birds with trackers has yet left Iceland but the first two colour-ringed birds have been seen in Ireland – an adult from the east and a juvenile from the south (see map).

Breeding studies of Black-tailed Godwits have been ongoing since 2001 and a small number of adults and chicks were ringed this year. This graph, which appears in the blog Why is spring migration getting earlier? showed that recent recruits to the population arrive in Iceland earlier than birds from previous generations.

Dates of spring arrival into Iceland of 46 individuals hatched in different years and subsequently recorded on spring arrival (reproduced from Gill et al. 2014) 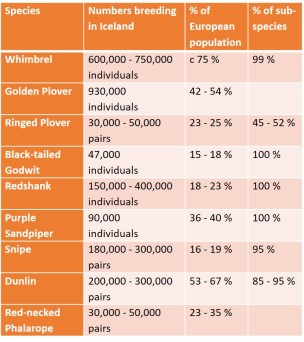 Iceland is hugely important for breeding waders. It holds about 75% of Europe’s breeding Whimbrel, over half of the region’s Dunlin and perhaps half of its Golden Plover. Although changes to the way land is farmed may have provided opportunities for some species, such as Black-tailed Godwits, intensification and the timing of operations have the potential to impact distribution and breeding success. A paper by Lilja Jóhannesdóttir was written up as a blog Do Iceland’s farmers care about wader conservation? and she successfully completed her PhD Links between agricultural management and wader populations in sub-arctic landscapes in June 2017.

The amount of woodland is changing in Iceland, with more forestry and shelter belts around summer cottages. This is an issue that was highlighted in an AEWA report published in the autumn of 2016. In the spring, Aldís Pálsdóttir started a new PhD at the University of Iceland, in which she will explore the effects of forestry on breeding waders in Iceland. Her first task in the field was to measure the effects of forest patches on breeding wader distribution, which involved walking over 400km of survey transects! Complementary work this summer by Harry Ewing, as part of his Masters in Applied Ecology and Conservation at the University of East Anglia, has explored how levels of wader nest predation vary with distance from forest patches. There’s more about the effects of woodland on breeding waders in this recent Lapwing blog: Mastering Lapwing Conservation.

Geolocators provide a cost-effective way of collecting information on the year-round movements of individual birds, as long as birds can be recaught in the breeding season following the deployment of the tags. This blog summarises a useful paper about the safe use of geolocators. 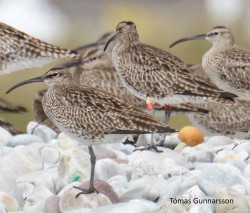 Camilo Carneiro is studying for a PhD at the University of Aveiro. His project, entitled Bridging from arctic to the tropics: implications of long distance migration to individual fitness, takes him to Iceland in the summer and to Mauritania and Guinea-Bissau in the winter time. By putting geolocators on Whimbrels in Iceland, he can establish the migration strategies of individuals. He has already mapped 96 migrations of 32 individual birds and we look forward to seeing the results from his studies. A flavour can be found here, in blogs about the migration of Icelandic Whimbrel and the first results of initial geolocator work by José Alves, one of Camilo’s supervisors.

Ringed Plovers that breed in Iceland are thought to spend the winter in southern Europe and northern Africa. Böðvar Þórisson has been studying breeding Ringed Plovers for many years, with recent work including using geolocators to explore the migration routes and timings of individuals. This year he managed to retrieve 7 of the 9 geolocators that he put on in 2016 – look out for a poster on this at IWSG 2017 in Prague. These birds had spent their winters in Mauritania, Portugal, Spain, France and southern England. 16 new tags were deployed during 2017, including a number on the same birds as in 2016.

In collaboration with Yann Kolbeinsson and Rob van Bemmelen, Jóse Alves and other members of the team have been using geolocators to study Red-necked Phalarope migration. Some birds migrate to the Pacific Ocean around coastal South America and the Galapagos but how do they get there and what is the timing of their movements? These two articles tell the story of one bird from Shetland (UK) and moulting flocks in the Bay of Fundy (Canada). Sixteen new geolocators were deployed but none of the ten deployed in 2016 were retrieved. Perhaps Red-necked Phalaropes are not that site-faithful?

So how good a breeding season was it?

As described in this blog, the productivity of Iceland’s Black-tailed Godwits is closely linked to May temperatures – unless a volcano erupts. Each June, Tómas Gunnarsson collects information on the number of successful broods, based on a 198 km car-based transect through south Iceland. Repeating this survey in 2017 he discovered a record number of broods, adding the right-hand orange dot to the graph alongside. May 2017 was warmer than any spring during the study period covered for the IBIS paper and the number of June broods was higher too. It is not surprising that there are so many reports of juvenile Icelandic Black-tailed Godwits in Britain and Ireland this August.

For other species, where productivity is recorded in the same manner (Whimbrels, Oystercatchers and Golden Plovers), the 2017 season was also the best in the period since 2012. Perhaps other species, such as Redshank and Snipe, did well too? Will these cohorts of juveniles be big enough for there to be a detectable uplift in number on this winter’s I-WeBS and  WeBS counts?

8 thoughts on “A great summer for Iceland’s waders?”