The Ireland to Iceland air link opens in February and does not close until well into May, as swans, geese, ducks, waders, gulls and passerines head north. At the end of June it opens again, with the first failed breeders returning to Ireland. Species such as Oystercatcher and Black-tailed Godwit spend much more of the year in Ireland than they do in Iceland.

Most Oystercatchers are being ringed with two letter engraved rings, along with two colour-rings: Photo Tómas Gunnarsson

The island of Ireland holds important populations of waders in the wintertime – everything from Grey Plovers from Siberia to Turnstones from Canada – but there is  special relationship with Iceland. It’s the next stopping off point for passage Sanderling, as they fly from Africa to Greenland, and the ultimate destination for lots of wintering birds such as Snipe, Redshank and Golden Plovers.

A lot of the Oystercatchers seen around Ireland’s coastline breed in Iceland, as has been shown by the Dublin Bay Birds Project. Birds start moving north very early, as shown by the appearance of yellow-ringed Dublin Bay birds in Tiree before the end of February each year. Migratory decisions for Icelandic Oystercatchers explains how a new Icelandic project is examining the costs and benefits of being a migrant. Irish reports of Icelandic colour-ringed birds are helping to provide answers – and the Dublin Bay birds are providing great additional data. The first paper to come out of this project is summarised in Which Icelandic Oystercatchers cross the Atlantic? 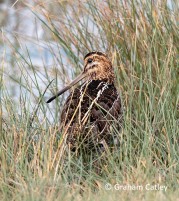 Each autumn, Irish-breeding Snipe are joined by much larger numbers from the north and east. About a quarter of foreign-ringed snipe that have been found in the island of Ireland are of Icelandic origin, compared to just one out of 255 in England. Snipe & Jack Snipe in the UK and Ireland compares the migratory strategies of the two species and laments the decline of Common Snipe, as a breeding species.

Some of the later waders to use the Ireland to Iceland flyway are Whimbrels, many of which stop off in Ireland on spring migration. Whimbrels on the move summarises a paper about the movements of Icelandic, ringed Whimbrel. Since its publication, a new paper has shown that Whimbrel are able to fly between Iceland and west Africa in one jump but that they sometimes need to stop off on the way north. See Very rapid long-distance sea crossing by a migratory bird by José Alves and colleagues and Iceland to Africa non-stop by Camilo Carneiro and colleagues. Camilo has shown that individual birds leave Africa at the same time each year so it is not surprising that spring passage in Ireland is so consistent in its timing (Whimbrel: time to leave).

WaderTales was invented as a way of providing feedback to colour-ring readers who focused on Black-tailed Godwits. There are 19 blogs about the species, some of which may well appeal to birdwatchers who have spotted colour-ringed birds anywhere between Belfast Harbour and the Shannon Estuary.

We are all aware that migration is getting earlier but how does this happen? Monitoring the annual arrival of individual colour-ringed Black-tailed Godwits in Iceland may well have provided an answer. Why is spring migration getting earlier? reveals that it is new recruits into the breeding population that are setting the pace; they are reaching Iceland earlier than previous generations.

Another fascinating story that is revealed by colour-ringing is the synchronous arrival in Iceland of the two members of breeding pairs of Black-tailed Godwits, even if one wintered in Ireland and the other in France. You can read more here.

Ireland is a very important winter destination for Iceland’s Redshank, Golden Plover and Snipe. You can read more in Ireland’s wintering waders, a blog based on the most recent population estimates for the island of Ireland, generated from WeBS data in Northern Ireland and I-WeBS in the Republic. A paper in Irish Birds revealed a 20% drop in wader numbers over a five-year period. One of the biggest declines was in Redshank, most of which will be of Icelandic origin. We don’t really know what is happening to winter numbers of Golden Plover or Snipe.

Each spring, thousands of waders pass through Ireland on their way from Africa to Iceland, and beyond to Greenland and Canada. By the end of the first week of May, most of the waders that breed in Iceland (Black-tailed Godwit, Whimbrel, Redshank, Oystercatcher, Snipe and Golden Plover) will be on territory but birds headed further north are on a later schedule.

The month of May sees departures of Sanderling, Turnstone and Knot that have spent the winter around the coasts of Ireland. Before they go, their numbers will be swelled with the addition of newly-arrived flocks from Africa and southern Europe. The blog Travel advice for Sanderling, reveals fascinating research results about Sanderling migration, generated by thousands of reports of colour-ringed birds. Why do some Sanderling travel all the way from Greenland to South Africa when they could do just as well by staying in Ireland?

Most of these May-departure flocks of waders, which also include Dunlin and Ringed Plover, will stop off in Iceland to refuel and to await good conditions for the next stage of their journeys to the Arctic.

WaderTales were developed in East Anglia so many of the articles about breeding waders have an English feel to them. Hopefully, some of the blogs will still appeal. Anyone trying to support breeding Lapwing populations might be interested in A helping hand for Lapwings, which also talks about Redshank. In a more recent blog, Tool-kit for wader conservation, there’s a summary of techniques available to conservationists who focus on waders breeding on lowland wet grassland.

There’s an Icelandic focus to WaderTales too and a blog, which looks at the attitudes of farmers. This may well resonate with conservationists (scientists, birdwatchers and farmers) who are trying to work together to improve conditions for Irish breeding waders. As Icelandic farming expands, what are farmers prepared to do to support breeding waders, many of which are destined to spend the winter on Irish estuaries. See: Do Iceland’s farmers care about wader conservation?

Ireland – a special place for Curlews 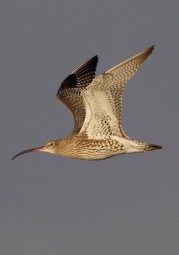 Is the Curlew really near-threatened? considers the plight of breeding Curlew. It’s easy to understand why BirdWatch Ireland, RSPB, BTO, WWT and GWCT  are focusing on this species How long will it be until breeding Curlew are lost from Ireland, completely?

The threat to the Curlew is real, especially when set in an international context. Two species of curlew are probably already extinct and other members of the Numeniini (curlews, godwits and Upland Sandpiper) are facing a similar set of problems to those that probably caused the demise of the Eskimo Curlew and Slender-billed Curlew. Why are we losing our large waders? outlines the background to a global problem.

There’s a WaderTales blog that summarises a paper from BTO and RSPB – Curlews can’t wait for a treatment plan. Although the analyses are based on British data, the results are highly relevant to Irish Curlews.  If you prefer your Curlew writing to be more lyrical, please read Curlew Moon which has it its heart the similarly titled book by Mary Colwell.

A more recent Curlew blog reveals the results of the Irish breeding survey in the summers of 2015, 2016 & 2017, with the shocking headline figure of a 96% decline: Ireland’s Curlew Crisis.

Hundreds of  birdwatchers take part in the Irish Wetland Bird Survey (Republic) and the Wetland Bird Survey (Northern Ireland). These counts identify and monitor key sites for wintering waders – and wildfowl. Whilst mud  and sand-flats are, of course, important to waders, so are roost sites. A place to roost discusses the importance of safe, high-tide roosts, especially in terms of energetics. It has been estimated that the cost of flying to and from roosts might account for up to 14% of a bird’s daily energy expenditure. That’s something to think about next time you see a dog chasing off a flock of roosting waders. This blog about Disturbed Turnstone suggests that pressures from people (and dogs) can cause a redistribution of wintering birds. 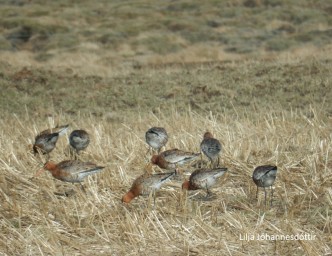 Hopefully, this summary  gives a flavour of some of the issues being faced by Irish waders and the research to which they are contributing. There are already over 90 blogs in the WaderTales series, with one or two new blogs being produced each month. If you want to know how volcanoes affect breeding waders in Iceland, why Black-tailed Godwits wear colour-rings or if there are costs to carrying a geolocator have a look here.

There’s a useful summary about wader migration to, from and through Ireland in Which wader, when and why?

3 thoughts on “Flyway from Ireland to Iceland”