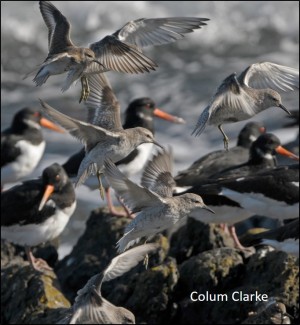 The island of Ireland is a great refuge for wintering waders, washed as it is by the warm waters of the Gulf Stream. It’s just a quick hop across the Atlantic from Iceland for Black-tailed Godwits, Golden Plovers, Redshanks and Oystercatchers. For birds travelling from Siberia, such as Bar-tailed Godwits and Grey Plovers, it’s a longer journey but one that’s well worth making.

If Ireland is such a great destination for shorebirds, why do the latest population estimates reveal a decline of nearly 20% in wader numbers in just five years?

This blog summarises the wader information, published in Estimates of waterbird numbers wintering in Ireland, 2011/12 – 2015/16 in Irish Birds. The totals in the report are split into counts for the Republic of Ireland and Northern Ireland but, given that waders don’t recognise borders, most of the comments in this blog relate to the whole of Ireland. The results for 2011-16 have been compared to the equivalent figures for 2006-11 and set in the context of the totals of wintering waders throughout the East Atlantic flyway, as combined by Wetlands International. The Irish data were collected by the amazing volunteers who make monthly, winter counts for I-WeBS (BirdWatch Ireland & National Parks & Wildlife Service) and WeBS (BTO/RSPB/JNCC in Northern Ireland).

Fifteen species are considered in this report. The most numerous are Lapwing and Golden Plover, which account for an estimate over 170,000 individuals between them, whilst the smallest contributions are made by Purple Sandpiper (662) and Greenshank (1317). In total, the average estimated number of waders in the winters during the period 2011-16 is 429,170 birds but it should be noted that this total excludes two widespread and common species – Woodcock and Snipe – as well as the enigmatic Jack Snipe. To update previous estimates for these three species, which were last made using distribution and abundance data collected during Bird Atlas 2007-11 fieldwork, it would be necessary to run a special inland survey. There is also some question about Lapwing and Golden Plover numbers, simply because so many of these birds are found in areas that are not covered by monthly waterbird counts. 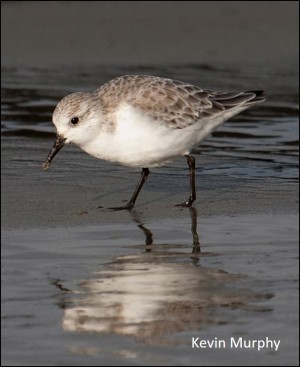 The Irish Sanderling population has increased by 13.2% in five years

The combined average winter maximum count of the 15 wader species examined in the report declined by 102,310 birds (19%) in the five-year period between 2006-11 and 2011-16. This is extremely worrying. If Lapwing and Golden Plover are excluded from consideration, as there is uncertainty about the completeness of counts, there are five species that are of particular concern; Knot numbers dropped by more than 40% and Oystercatcher, Dunlin, Redshank and Turnstone numbers by more than 20%. The Purple Sandpiper population estimate dropped by over 30% but relatively small numbers of this species are encountered around the rocky coast of Ireland. The only species to show increases were Sanderling, Bar-tailed Godwit, Black-tailed Godwit and Greenshank.

In a previous WaderTales blog, there is detailed information about population estimates for Great Britain: Do population estimates matter? In Great Britain there were similar rates of decline for Redshank and Turnstone (measured over an eight-year, rather than five-year period) but much smaller falls for Knot, Oystercatcher and Dunlin. The possible causes of the changes in Ireland are discussed in the paper in Irish Birds. They include flyway-scale declines (e.g. Knot and Curlew) and the possibility that more birds from the east are now wintering on the coasts of mainland Europe (e.g. Dunlin and Grey Plover). 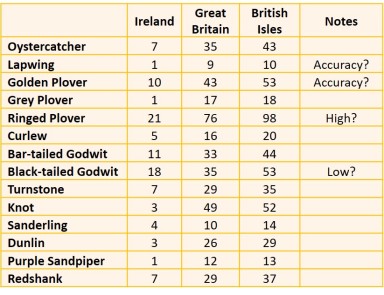 The table alongside gives an indication of the relative importance of Ireland, Great Britain and, together, the British Isles to the birds that use the East Atlantic flyway during the winter period. The three columns show the percentage of each species found in each of the three regions. Summarised international counts, as used in the paper, were kindly provided by Wetlands International. In the case of four species, Ireland is host to a significant proportion of the Icelandic breeding population (Oystercatcher, Golden Plover, Black-tailed Godwit and Redshank).

Notes: As mentioned earlier, there are questions about the precision of estimates for Lapwing and Golden Plover, although the population trends are reliable. The Ringed Plover percentage seems high (98% for British Isles) but this may well reflect the fact that the Non-estuarine Waterbird Survey has uncovered significant numbers of the species on the open shores of Great Britain. These extra birds are included in the new totals for GB but not in the flyway total. The percentages for Black-tailed Godwit seem low, as discussed further down.

Ireland is particularly important for Golden Plover, Ringed Plover, Bar-tailed Godwit and Black-tailed Godwit, as well as for the Icelandic subspecies of Redshank. Greenshank is excluded because the percentages are below 1% of the flyway population for Ireland and for Great Britain.

Although there are important populations of breeding waders in Ireland, the shores and wet fields of the island really come into their own during July and August, when the first ‘winter’ waders arrive, and they only become quiet again in April and May, when the last birds head north and east to nest. A successful breeder is likely only to be away for four or five months, meaning that these waders will spend by far the largest part of the year in Ireland. The island is even more important for immature birds. Young Oystercatchers that arrive from Iceland, Scotland or perhaps Norway when just a few months old are likely to spend the next 30 months in Ireland before making their first trip north. There is a WaderTales migration blog about the Oystercatchers that fly from Iceland: Migratory decisions for Icelandic Oystercatchers.

Curlew in the Republic

Curlew numbers in the Republic of Ireland illustrate the relative importance of the country for breeding and non-breeding populations. The winter population estimate for Curlew in the Republic is 28,300 but the most recent survey conducted by BirdWatch Ireland and NPWS, as summarised in the WaderTales blog Ireland’s Curlew Crisis, reveals that the number of breeding birds has crashed to just 138 pairs. Accounting for young Irish birds that have not started to breed, and even if we assume that all Irish birds stay in the country for the winter, then the total number of home-grown Curlew seen in non-breeding flocks is at most about 400. This means that every winter flock of 70 Curlew will contain an average of just one Irish bird. Far more deliver their curl-ew calls with a Scottish, Finnish or Swedish ‘accent’. The map below shows the migration pattern for Curlew ringed in or found in Britain & Ireland.

In the table above, it looks as if 18% of Iceland’s Black-tailed Godwits spend the winter in Ireland. This is probably an underestimate of the importance of the Republic of Ireland and Northern Ireland to the species. The flyway total for Black-tailed Godwit is given as between 98,000 and 134,000 in the Irish Birds paper and the percentage figure is based on 110,000. These three figures are almost certainly too high, as they build upon country-based estimates that have subsequently been revised. The true figure is likely to be around 60,000 to 65,000 (J. Gill pers. comm.), which would suggest that the maximum winter count in Ireland of 19,800 represents at least 30% of the islandica Black-tailed Godwits. Add in extra birds that moult in Ireland in the autumn, before moving further south to countries such as Portugal, and other birds that spend spring months on the island, and Ireland becomes even more important for Black-tailed Godwits! 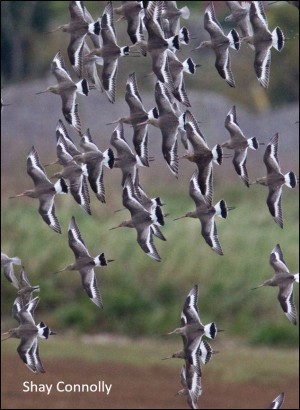 Most birdwatchers might associate flocks of waders with estuaries but Black-tailed Godwit is an excellent example of a species that also relies on inland fields, either close to estuaries or along river valleys. Whilst undertaking PhD research on Black-tailed Godwits in south-east Ireland, Daniel Hayhow showed that there is insufficient time to find enough estuarine food during the mid-winter tidal cycles, with birds topping up their resources on grassland. You can read more about the energetic consequences of choosing to winter in eastern England, Portugal and Ireland in this blog: Overtaking on migration. Site designation and planning decisions need to take account of the grassland feeding requirements of Black-tailed Godwits and other waders that do not spend all of their time on estuaries, particularly Curlew.

Some of the issues facing waders may be related to threats that species face in the breeding grounds. However, it may be easier to introduce measures that provide better protection and feeding opportunities in the wintering area, as ways of maintaining populations through the non-breeding season, than it is to deal with problems in the High Arctic. (Although we can all help by reducing carbon emissions, in order to minimise global warming, of course).

Reading the report, I was reminded of the need to consider a range of conservation issues: 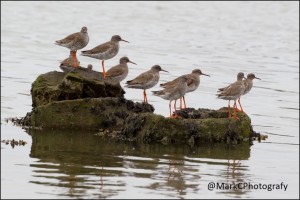 There is a complementary paper in British Birds, covering Great Britain. The wader information is summarised in this blog: Do population estimates matter?