April and May mark the start of the Common Sandpiper breeding season, as males display along rivers and streams and around the banks of lakes and reservoirs. Numbers in the United Kingdom have declined by 26% in just over 20 years, providing an increased focus to research that has been taking place over five decades.

This tale focuses on a year in the life of Common Sandpipers, using material gleaned from the book Common & Spotted Sandpipers by Phil Holland (published by Whittles in 2018) but with new information from recent migration studies. Phil’s fascinating book also includes chapters about the habitats used by both species, the food that they eat, predators that eat them and the way that Common Sandpipers have adapted (or failed to adapt) to changes in Britain over the last 250 years.

A female Spotted Sandpiper sets up a territory, attracts a male, lays a clutch of eggs which her partner then incubates, attracts and lays another clutch for another male, and so on. In Phil Holland’s book, there is an example of one female laying five clutches with three males over the course of six weeks – representing an egg-mass of four times her own body weight. There is plenty more fascinating stuff about Spotted Sandpipers in the book.

The Breeding Bird Survey indicates a fall in breeding Common Sandpiper numbers in the UK of 26% between 1995 and 2017, with a bigger decline in England (49%) than in Scotland (23%). Other BTO-led surveys suggest that the nationwide declines started in the mid-1980s, with a British fall of over 50% during this longer period. There have been similar declines elsewhere in Europe. Common Sandpiper is now amber-listed, as a species of conservation concern, in the UK.

Much of the detailed breeding season work on Common Sandpiper in the UK was undertaken in the English Peak District by Phil Holland and then Derek Yalden, to whom Phil Holland’s book is dedicated, with information supplemented by other bird ringers, particularly Tom Dougall in Scotland. 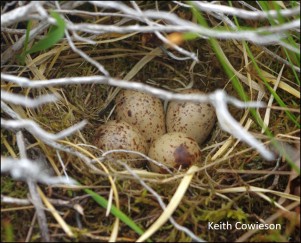 Male Common Sandpipers tend to arrive back from Africa a little earlier than females – with a median difference of just two days – and it is the male that holds the territory (females in Spotted Sandpiper). If two birds that were together in the previous year arrive back on site then they will usually pair up again. When they don’t, it’s because of a mismatch in the timing of arrival or because the female moves to a better territory or more experienced mate. It may not be easy to spot infidelity in the field but genetic analysis in Scotland showed that males were incubating the eggs that had not been fertilized by them in 5 out of 26 cases (Mee paper link). On two of these occasions, none of the clutch of four belonged to the male that was sitting on them. 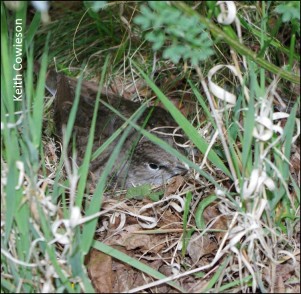 During the incubation period, males typically take the 15-hour night-shift and females the 9-hour day-shift. During their ‘time off’, males devote time to territory defence and look-out duties. Chicks hatch after three weeks and the growth rate of chicks is highest in warm, dry and sunny weather. Males do most of the parenting of chicks; females usually leave before the chicks fledge and occasionally, if there are late nests, before the eggs hatch. Experienced parents raise more chicks to the point of fledging. There is more fascinating detail in the book, which includes full references for papers.

Movements of ringed birds from Scotland and Northern England strongly suggested that adults left their breeding territories and headed south within the UK, to fatten up prior to migration to Africa. British ringers have caught birds weighing up to 80 g, twice the pre-fattening weight, suggesting the potential to move a long way in the next flight.

Geolocators have been a revelation, enabling individuals to be tracked for the whole annual cycle between one breeding season and the next. The story of the first UK Common Sandpiper to return with a functioning geolocator was told in Wader Study by Brian Bates and colleagues, revealing two stops in western Britain, a three-day break in Morocco and a direct flight to Senegal.

There’s a WaderTales blog about the use of geolocators on Green Sandpipers that gives more information about how data are collected and discusses how these devices affect the behaviour of the birds that carry them.

A follow-up paper by the same Scottish team from Highland Ringing Group, this time with Ron Summers as lead author, has been published in the Journal of Avian Biology (Non-breeding areas and timing of migration in relation to weather of Scottish-breeding common sandpipers). It summarises the journeys of 10 tagged birds, with a median departure date from Scotland of 9 July. Some individuals spent time fattening in England, then most birds staged for longer in Iberia before continuing to West Africa, with a median arrival time of 28 July. The southward migration from Scotland took an average 17.5 days (range 1.5–24 days), excluding the initial fuelling period.

Pere Josa and colleagues have studied Common Sandpipers in The Ebro Delta of Spain, writing up their findings in Wader Study as Autumn migration of the Common Sandpiper. These stop-over adults migrate seven weeks earlier than juveniles, putting on enough fat to travel at least 2000 km on the next stage of their journeys, which would take them to North Africa. They would need to refuel if they were to make it as far as West Africa, which is the main wintering area for Common Sandpipers. Common & Spotted Sandpipers provides many more examples of ringing and body condition studies carried out in stop-over sites between Sweden and Morocco.

Life in the south

Six of the tagged birds from Scotland spent most of the non-breeding season (October–February) on the coast of Guinea-Bissau, suggesting that this is a key area. Single birds occurred in Sierra Leone, Guinea, the Canary Islands and Western Sahara.

Coastal West Africa provides two major habitats for Common Sandpipers: mudflats associated with mangroves (as shown to the right) and rice fields. Phil Holland takes the reader around the mangroves of the world and discusses the numbers of Common and Spotted Sandpipers that have been reported from different countries. He suggests that rice fields provide supplementary food for birds that are mainly coastal winterers and wonders if the depletion of mangrove habitat  has affected Common Sandpipers.

The last day in West Africa, for the 10 tagged individuals, ranged from 3 to 20 April and the arrival dates in Scotland ranged from 19 April to 6 May. The birds typically staged twice between Morocco and the Channel and the median time taken for active migration was 16 days (range 13.5–20.5 days). The main migration strategy involved short- and medium-range flights, using tail-winds in most cases. Birds that left later spent shorter periods of time at stop-over locations.

Why so few Common Sandpipers? 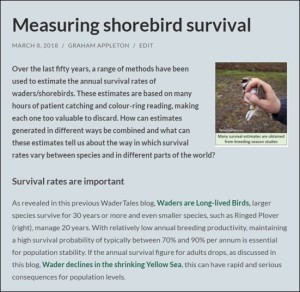 As discussed in the WaderTales blog summarising Patterns and processes in shorebird survival rates: a global review by Verónica Méndez in IBIS, the apparent annual survival rate of the Actitis family is low, with a calculated rate of 0.718 for Common Sandpiper and 0.497 for Spotted Sandpiper. Whether this has always been the case is unknown, of course, and Phil Holland points out that these calculations are based upon observations of colour-ringed individuals, at least some of which change territories between years, potentially leading to a reduction in detectability.

An analysis of demographic data for a small population of Common Sandpipers in northern England, by James Pearce-Higgins and colleagues indicated that the long-term decline in numbers was not due to low breeding success, instead being due to a low return rate of adults, which was negatively associated with the winter North Atlantic Oscillation. This suggested that climate change might be affecting annual survival.

In their paper about the 10 Scottish birds, tracked using geolocators, Ron Summers and colleagues matched movements to meteorological data during the migration period. They suggest that the weather during the southward migration was unlikely to adversely affect birds but that strong cross-winds or head-winds during the northward migration to the breeding grounds may do so. This accords with work on Black-tailed Godwits by Nathan Senner and colleagues which showed that the survival of satellite-tagged birds was reduced on the northward crossing from West Africa to Europe.

For the moment, there is no clear explanation for the fall in Common Sandpiper numbers. Given that it’s hard to change the climate or to study what might be happening to Common Sandpipers feeding amongst the mangroves of West Africa, it seems wise to focus on habitat and species protection in breeding areas. We also need to keep monitoring productivity and return rates of breeding populations in the UK and elsewhere, especially in the English Peak District.

Phil Holland’s book is a fascinating insight into the lives of the two Actitis species. It’s almost as if the reader is allowed to sit on a bank with the author and share intimate moments with these birds. Derek Yalden would have been delighted to see the project come to fruition but acknowledge that there is still much to learn. Who will spend the next 40 years studying Common Sandpipers in Europe and Africa or Asia and Australasia, or Spotted Sandpiper in the Americas?

Common & Spotted Sandpipers is published by Whittles Books. You can find out more by following this link.

Thomas Mondain-Monval (Lancaster University) is trying to understand the UK-decline of Common Sandpipers.  He is studying a breeding population in the Yorkshire Dales National Park, tracking birds on migration and studying them at a wintering site in Djoudj National Bird Sanctuary, Senegal.  Birds are fitted with colour rings and geolocators in the UK and Senegal, and Thomas would appreciate reports of migrating birds, which are likely to appear in Iberia, France and England. If licensed bird-ringers see birds with geolocators and spot opportunities to catch them and remove the trackers, this would be very helpful. Thomas can be contacted at:

The first paper from this research has been published in Bird Study and turned into a WaderTales blog.