In a 2020 paper, Mark Whittingham and colleagues show that, in one area of northeast England, the decline in Turnstone numbers is more obvious on mainland sites that are subject to human disturbance than on offshore refuges. Whilst national declines are probably linked to factors affecting productivity in breeding areas in Greenland and Canada, it is interesting that Turnstone seem to be withdrawing into areas where they are subject to less winter disturbance.

The Turnstones that we see around the coastline of Britain and Ireland in the winter are almost exclusively birds that fly here from Greenland and eastern Canada, as you can read in this blog about wader migration (Which wader, when and why?). Britain’s wintering Turnstone numbers are falling, as are populations of several other species, such as Curlew, Oystercatcher, Knot and Redshank (see Do population estimates matter?). Turnstones are opportunist feeders; although traditionally thought of as rocky coast specialists, they can also be found on muddy estuaries and around beach-bars in the Caribbean (Why do Turnstones eat chips?). 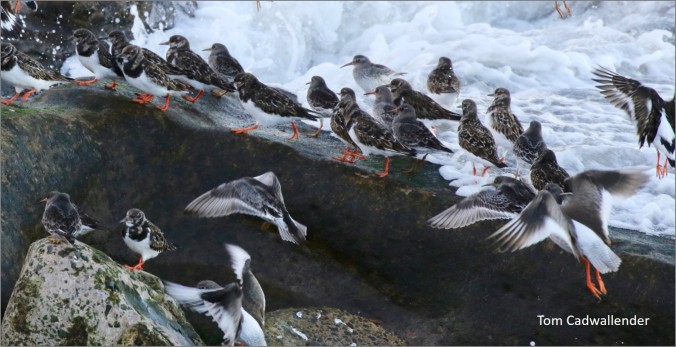 Assessing the effects of disturbance during the winter is not easy. Feeding waders may be flushed by bait-diggers, kayakers, dog-walkers etc. but is this an issue if the food that they were attempting to eat becomes available later? To demonstrate that disturbance is a real problem, one would ideally demonstrate reductions in fitness measures such as survival, recruitment and/or productivity. This is discussed in a paper by Jenny Gill and colleagues, who studied the potential effects of disturbance on feeding Black-tailed Godwits (paper in Journal of Applied Ecology) and in another paper by Colin Beale and Pat Monaghan that shows that well-fed Turnstones were quicker to respond to disturbance than birds that had not received supplementary food supplies (Animal Behaviour).  Birds may be quicker to fly if they are well-fed or there is somewhere else where they can feed. The ones that have no choice and are still hungry may be the last to leave. The issue is discussed more widely in Why behavioural responses may not reflect the population consequences of human disturbance.

It’s not just waders : Little Egret being chased  along the shores of the River Bann SPA and (below) the last few Brent Geese being removed from saltmarsh on the Exe Estuary (SPA)

Potentially, roosting waders could be more prone to disturbance than feeding birds, because of the wasted energy associated with flying around over the high-tide period or relocating to an alternative roost site (see A place to roost). An interesting modelling paper by Mark Rehfisch and colleagues showed that 90% of Dunlin, Grey Plover and Redshank on the Wash could be serviced by roost sites that were 2 km, 2.5 km and 3.5 km apart, respectively (Applied Ecology). These numbers may or may not be comparable for Turnstone but do suggest that small- to medium-sized waders feed within relatively short distances of their preferred roosting areas.

Turnstone in this study

Turnstone is a species of qualifying interest for the Northumbria Coast Special Protection Area (SPA) and for several Sites of Special Scientific Interest (SSSI) in the region. On this 140 km stretch of coast, the population of Turnstone declined by 27% between 2004/5 and 2009/10, during a period when the wintering number within England declined by 9%. There was concern that human disturbance may be one of the drivers of the population decline of wintering Turmstone within the SPA. Potentially such conditions could become more challenging towards the end of the winter, when food supplies may be less and birds are preparing for migration, or during periods of very cold weather. Given an increase in the local human (and canine) population and a marked rise in tourism within the region, it was suggested that the potential for disturbance may have increased.

The aim of the study was to compare wintering Turnstone densities and changes in counts across time from sites with differing levels of human disturbance. This was possible because long-term Wetland Bird Survey counts of waders had been made in the period between 1998/99 and 2015/16. Counts were available for two offshore refuges and 17 mainland sites that were subject to higher levels of human disturbance. No direct measure of human disturbance was available so questionnaires were used to determine the behaviour of beach users, in terms of distance travelled to visit the coast. The paper contains full detail of this methodology.

After controlling for the extent of preferred habitat (rocky shore) at each site the authors found that:

Graph showing Turnstone densities at different distances from refuges on the coast of northeast England. Figure from paper in Bird Study.

The authors of the Bird Study paper have not sought to explain declines in Turnstone numbers, but they have provided some useful references in the Discussion that highlight how improved water treatment and warmer winters might have affected regional distributions. They also remind us that Turnstone numbers are declining – as is the case for several High Arctic species. Having established that there are declines, they use the pattern of change to ask questions about whether disturbance is an issue for this species.

Seahouses, looking out towards The Farnes – not far, as the Turnstone flies

The results of the research suggest that Turnstones make greater use of relatively undisturbed areas (offshore refuges) than those subject to greater disturbance by humans and their four-legged friends. Previous work has shown that excessive disturbance prevents the use of roosts and that disturbance can have serious energetic consequences (see A place to roost). Although the paper does not distinguish between birds that are foraging or roosting, this study suggests greater provision of undisturbed sites (refuges) within, or close to, protected areas is important for Turnstones, especially if there is also a drive to build more houses and attract more tourists.

Beaches at Seaburn (County Durham) and Ross Back Sands (Northumberland). Proximity to human settlement makes a big difference! There are 15 dogs in the left-hand picture.

When looking at the planning process for developments close to SPAs, Mark Whittingham and his colleagues suggest that three issues need to be considered in some detail: 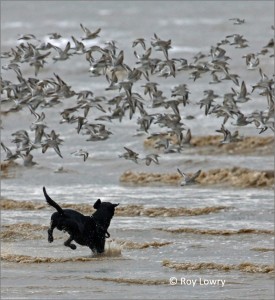 Dogs are an important part of the disturbance issue.

The paper at the heart of this blog is: