Curlews waiting for the tide to drop: Graham Catley

Thousands of British and Irish birdwatchers visit estuaries but there’s a lot of coastal habitat that gets little attention.  That’s where you’ll find 87% of the UK’s Purple Sandpipers, over half of the Turnstones and nearly half of the Ringed Plover – or those were the figures nine years ago.  It’s time to update these estimates, which is where NEWS-III came in. That’s the catchy name for the third Non-estuarine Waterbird Survey, which operated in the UK and Ireland over the period 1 Dec 2015 to 29 Feb 2016.

We’ll be looking out for colour-ringed Oystercatchers: Tómas Gunnarsson

We covered 6 beach sections as our contribution to NEWS-II over the Christmas period 2006/07: three horrible stretches right next to the main A78 along the Clyde coast and three lovely beaches on the island of Cumbrae. We found 57 waders on the first set, while dodging the traffic, and 184 on a very relaxed day trip from Largs by ferry. There were comparable numbers of Curlew, Turnstone and Redshank but more Oystercatchers on the wider, island beaches.  That’s where we also found our only Ringed Plover, as well as 11 Purple Sandpipers and 3 Lapwing. 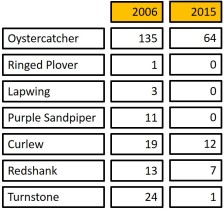 This year, we found far fewer waders than nine years ago. The table alongside provides a comparison for the three sections that we covered on Cumbrae for NEWS II and NEWS III. We failed to find any Purple Sandpipers in any of the 17 sections of the Clyde coast that we covered but were surprised to see a total of 5 Greenshanks. There seemed to be far fewer seabirds too. This is just a tiny snap-shot that may not be representative of the picture across the whole of the coastline of Britain & Ireland. Let’s hope that, despite the stormy weather, there was sufficient coverage for robust anlayses to be carried out by BTO staff.

We know that wader number on estuaries are changing.  For instance, in the last few years, numbers of Ringed Plover in the UK have been falling (see figure).  The declining line indicates a significant drop but it won’t be quite such a concern if this year’s NEWS-III surveyors find that there are now more Ringed Plovers on open coasts.  That may seem like an optimistic suggestion, unless you look at changes between NEWS (1997/98) and NEWS-II (2006/07).  During this period, at the same time that WeBS counts of estuaries were falling, there was actually a 25% increase in Ringed Plover numbers on open coast.  Perhaps this redistribution from estuaries to open coasts has continued?

Twenty-one species of wader were recorded during NEWS-II, with Oystercatcher being the most numerous with an estimated total of 64,064 for the whole non-estuarine coastline of the UK. The full report is available on the BTO website .  With support from hundreds of volunteer birdwatchers it was possible to make population estimates for the 12 most numerous species, including the non-estuarine specialists, Ringed Plover, Sanderling, Purple Sandpiper and Turnstone.  These four species accounted for estimates of 15,230, 6,295, 11,306 and 30,122 individuals respectively.  The table alongside shows the intertidal-zone totals and the percentage of the total UK population that each estimate comprises, based on Population estimates of birds in Great Britain & the United Kingdom by Musgrove et al which was published in British Birds.

Five of the species that were in the top 12 for NEWS-II have been categorised as near-threatened by IUCN/BirdLife.  Oystercatcher is the most numerous of the five, with over 64,000 in intertidal areas of the open coast, representing nearly 20% of the national wintering population.  There are relatively small numbers of Bar-tailed Godwit, Lapwing and Knot but 26,744 Curlew is equivalent to 17.8% of the UK total.   There’s a WaderTales blog about the near-threatened designation of Curlew. 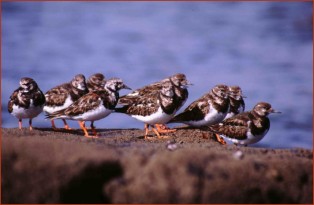 59% of the UK’s Turnstone ar found on the open shore: Derek Belsey/BTO

Unfortunately for the scientists who organised NEWS-III there is a huge disparity between the distribution of birdwatchers and the number of coastal stretches that would ideally be surveyed, so let’s hope a good number of English birdwatchers decided to spend a few days in Scotland over the survey period.  Three-quarters of the open coast in the UK is in Scotland (all those crinkly bits, sea-lochs and islands) with Northern Ireland, England and Wales respectively having approximately 2.3%, 16.0% and 6.6%.  Taking account of the spread of the available sites, there’s a relatively uniform UK-wide distribution of most species, although  Sanderling has a southerly bias to its distribution and Purple Sandpiper a strong northern bias.

NEWS-III was not just about waders; volunteers were asked to record other waterbirds too. Our counts for NEWS-II covered Cormorant and Shag, Mute Swan, Eider, Red-breasted Merganser, Wigeon, Mallard, Guillemot and Grey Heron.

Whilst I was delighted to use WaderTales to promote NEWS-III, there was an ulterior motive. We wanted counters to look out for Oystercatchers wearing colour rings. Icelandic Oystercatchers can be encountered almost anywhere but the ones in England are very much outnumbered by those from Norway, the other main source of wintering birds. The table alongside gives an idea of the north-westerly distribution of birds with an Icelandic origin.

Colour-ringed Icelandic Oystercatchers are part of a new project to look at how climate change might be affecting migration patterns. There’s a blog about the project here. The map alongside shows where colour-ringed birds from the study areas in Iceland have already been found, with most in Scotland and Ireland.  Birds will either be wearing 3 colour-rings and a green or white flag or two colour-rings and an engraved darvik.

NEWS only happens every few years so this was a great opportunity to contribute to our understanding of the conservation status of some important species, several of which are now near-threatened. I am looking forward to the results with interest, and a little concern.

6 thoughts on “NEWS and Oystercatchers”