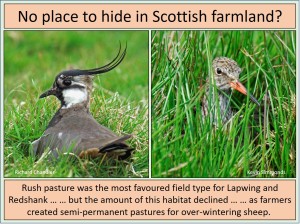 Why is Scotland losing its breeding waders? The latest WaderTales blog with a Scottish flavour is a story from Strathallan, based on observations by Mike Bell.

“If you’ve taken the A9 north of Stirling, through Strathallan, perhaps you might have noticed displaying Lapwing, Oystercatcher, Curlew and Redshank? Over a 25-year period, the number of breeding waders in this valley and another one that runs northwest and that can be seen from the B827 has dropped from 600 pairs to just 76 – that’s a loss of 87%, or over 20 pairs per year.”

Waiting for the wind – spring flocks of Black-tailed Godwit on Scotland Observations from Tiree by John Bowler and others gave a unique insight into what happens if northerly winds set in at migration time.

Establishing breeding requirements of Whimbrel  focuses on the different habitat needs of adults and chicks in Shetland.

Oystercatchers: from shingle beach to roof-tops details significant declines in Scotland, at least partly explained by predation. An increasing number have now taken to nesting on roofs.

UK Dotterel numbers have fallen by 57% presents the results of an RSPB survey that was published in Bird Study.

Prickly problems for waders explains how SNH are trying to deal with introduced Hedgehogs in the Outer Hebrides, where they are a major problem for breeding waders.

And here are another nine which may well appeal to Scottish birdwatchers:

There are over 40 WaderTales blogs. The intention is to add one or two new blogs each month. You can sign up to receive an e-mail notification when a new one is published.

4 thoughts on “WaderTales: a taste of Scotland”