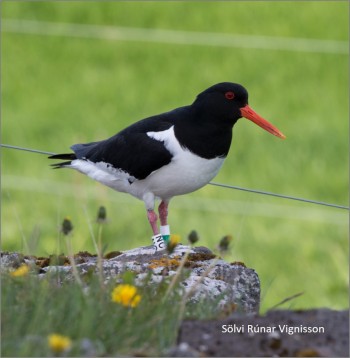 Most Icelandic Oystercatchers leave Iceland in the autumn, crossing the Atlantic and arriving in Ireland, the UK and mainland Europe. Despite much shorter day-length and colder conditions, 30% spend the winter in Iceland, as discussed in this blog (Mission Impossible).

A 2020 paper from Verónica Méndez and colleagues asks whether birds that stay in Iceland or cross the Atlantic differ in sex, body-size or breeding location (within Iceland) and whether birds behave differently in different years. Interestingly, they were also able to test whether there is assortative mating – do Oystercatchers that stay in Iceland pair with other stay-at-home birds?

Iceland lies at the northern edge of the breeding range of Eurasian Oystercatchers. The country supports an unusually high proportion of wintering Oystercatchers, given its latitude and winter temperatures (Þórisson et al. 2018), and this may be influenced by the trans-oceanic flight of at least 700 km that migratory individuals must undertake to reach the European wintering sites. Individuals that migrate or stay within Iceland could differ in body size, for example if size influences the capacity to survive adverse winter conditions. Females tend to be slightly larger, and thus any sex differences in migratory behaviour could potentially reflect differences in body size.

It would be easy to imagine a scenario in which Oystercatcher pairs try to breed as early as possible, as this could increase the number of potential nesting attempts, as discussed in Time to nest again, based on Morrison et al. 2019. Does this mean that stay-at-home birds pair off at the start of the season, before migrants arrive? Given that most birds will choose the same mate in successive years, what happens in mixed pairs if a resident is waiting around for a delayed migrant? Is divorce likely to occur, as discussed in the importance of synchrony for Black-tailed Godwits, and could this mean that mixed pairs are rare?

A huge amount of the evidence that was used to answer the questions posed by Verónica and her colleagues was provided by volunteer birdwatchers, who reported colour-ringed Oystercatchers in their wintering areas, in the period through to April 2018. There’s an impressive set of dots on the map alongside, from the north of Scotland through to Spain, and the number of sightings continues to rise. It’s perhaps unsurprising, given the direction of travel from Iceland, that there is a strong westerly bias to the distribution across the British Isles.

The sample size from colour-ring observations was not big enough to answer all of the questions posed above, especially relating to whether pairs mate assortatively. To provide one data-point, it’s necessary to know the winter locations of both members of the pair. Might feather isotope ratios provide some help?

Oystercatchers that winter in Iceland use a restricted number of coastal sites (as inland sites are frozen during winter) and forage on marine prey. Elsewhere in Europe, a much wider range of marine and freshwater resources is available, with birds readily moving between the shoreline and fields, golf-courses, football pitches and road-side verges. Previous studies have shown that terrestrial diets produce different carbon and nitrogen isotope ratios, based on salinity and trophic level of prey items.  Are differences in habitat use and diet of Oystercatchers reflected in carbon (δ13C) and nitrogen (δ15N) isotope ratios of feathers grown during late winter?

The research team hoped that isotopic signatures from resighted colour-marked migrants and residents would be sufficiently different to be able to predict the probable wintering areas (Europe or Iceland) of marked birds not seen away from their breeding sites. If so, this would greatly increase the sample size, by enabling the combination of data from observations of colour-marked individuals with information on birds that could be assigned as Icelandic or European winterers using the isotopic composition of their feathers. They predicted that it would then be possible to:

The work covered in this paper was conducted between 2013 and 2017. Full details of the study areas and methods are available in the paper – link below.

An Icelandic Oysterctaher spending the winter in Co. Sligo in Ireland

Of the 537 colour-ringed adults in the study, 58 were seen away from Iceland and 55 were shown to be resident in Iceland. Oystercatchers undertake a partial moult at the end of the winter period, when they grow new feathers on the neck and chest. The isotopic signature of a tiny piece of one of these feathers, taken from each adult at the time of ringing or recapture, was determined. The values of δ13C, which relates to habitat salinity, and δ15N, which relates to trophic level of diet, varied between residents and migrants but there was an overlap (details in paper).  There was enough of a difference, however, for it to be possible to allocate two-thirds of ringed birds that had not been seen in the winter period to the resident and migratory categories, with sufficient certainty, thereby increasing the sample size for other tests.

The 18 individuals that were observed in more than one winter were all consistent in migratory behaviour (10 residents and 8 migrants) and each was seen in the same specific location (Iceland or western Europe) in both winters. Where feather samples were taken in more than one year, there was no evidence of any bird changing its habitat or diet.

Females and males were equally likely to migrate and there was no evidence that bigger (or smaller) birds were more likely to leave Iceland. Most Oystercatchers that winter in Iceland are in flocks in the west of the country, where the coast is warmed by the Gulf Stream. Unsurprisingly, westerly breeders were more likely to be resident than those in the south or northeast of Iceland (see figure below).

Vero and her colleagues were able to assign the migratory strategy to both members of the pair for 162 pairs (either by resightings or using predictions from isotopic signatures). Among these, 75 pairs (46%) were both migrants, 32 pairs (20%) were both residents and 55 pairs (34%) were mixed. The frequency of full-migrant, full-resident or mixed pairs varied significantly among regions, which was to be expected, given the differences in the likelihood of migrating from different parts of Iceland. There was no evidence of assortative mating; the likelihood of a particular individual pairing up with a migrant was as expected from the proportion of migrants in the area; it was not influenced by whether the particular individual was itself a migrant (see figure above).

To migrate or remain in Iceland

The consistency of adult migratory behaviour suggests that migratory strategy is determined in early life, and the regional variation in the frequency of migrants and residents may thus reflect variation in the conditions encountered by individuals during this life stage. As noted above, the frequency of residency is greatest amongst Oystercatchers breeding in the west of Iceland, which are the areas closest to the main wintering locations. Juveniles from the northwest and west are more likely to encounter these flocks of adult and sub-adult birds when moving south, than juveniles from the south, north-east and east, which are more likely to encounter migrating adults.

The regional variation in migratory strategy could arise through the influence of social cues, with juveniles adopting the behaviour of Oystercatchers they encounter and then recruiting back into their natal locations (more about this in Generational Change, focusing on Black-tailed Godwits). Birdwatchers across Europe will hopefully help to test this theory, by tracking colour-ringed juveniles during the early years of life. This is all part of a quest to identify the conditions that influence migratory behaviour and to understand the consequences, in terms of survival rates and productivity, of adopting different migratory traits.

5 thoughts on “Which Icelandic Oystercatchers cross the Atlantic?”