In a fascinating comparison of weight gained by Red Knot and Ruddy Turnstone during spring migration in Delaware Bay, on America’s east-coast flyway, Anna Tucker and colleagues show that Knot are far more vulnerable to annual variations in their main food supply than more flexible Turnstones, which target the same food if it is available. Given that changing weather patterns, associated with a warming climate, are expected to make resource availability harder to predict, the authors suggest that populations of migrant shorebirds (waders) that rely on a specific resource being available at the right time are likely to be more vulnerable – as has become apparent for Delaware Bay Knot.

Feast on the beach

Spring shorebird migration in Delaware Bay is largely fuelled by the superabundance of the eggs of horseshoe crabs. Some of the numbers associated with crabs, eggs and migratory waders are amazing!

In Delaware Bay, horseshoe crabs spawn once a year, during the highest tides in May and early June, a period which overlaps with shorebird stopovers. The largest spawning events typically occur on a full-moon high tide, as long as the water temperature is higher than 15°C. Over the course of two decades, spring water temperatures have fluctuated in Delaware Bay; this annual variability in temperature is predicted to increase with climate change.

Prior to the paper by Anna Tucker and colleagues, which is at the heart of this blog, it had been shown that cooler temperatures cause delays in crab spawn, with consequences for migratory shorebirds. Anna’s research aimed to see whether Knot, which specialise on horseshoe crab eggs, are more susceptible to seasonal differences than Turnstone, which are more generalist foragers.

Knot and Turnstone both breed in the Arctic so they have similarly long journeys ahead of them when they leave Delaware Bay. The prediction was that individual Knot would show more variation in the timing and rate of mass gain than individual Turnstone and that mass gain in Knot, but not Turnstone, would be dependent on the timing of horseshoe crab spawning. 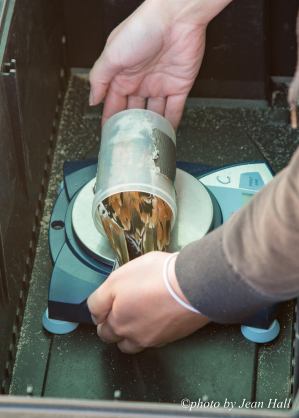 Northward migration of Knot and Turnstone begins in late April/early May, with most birds arriving in Delaware Bay in mid to late May and staying for between one and two weeks, before continuing north to begin breeding in early June. The optimal breeding window in the Arctic is short and punctual arrival on territory is important if waders are to have a productive nesting season. This means that spring fattening at migration sites can directly affect breeding success. Weight data for both species were collected between 1 May and 5 June over a twenty-two-year period between 1997 and 2018, with horseshoe crab counts being made since 2003. Birds were marked with flags, with resightings in the same year providing an indication of length of stay. Recaptures of marked birds provided information on weight gain, while sightings in subsequent years gave estimates of apparent survival.

For both Knot and Turnstone, spring arrival was pretty consistent between years, over the 22-year period. Approximately 95% of individuals had generally arrived by the time of the seventh sampling period (26–28 May).

The proportion of horseshoe crab spawn that occurred by the time of peak shorebird arrival depended upon water temperature (see paper for details), ranging from just under a quarter (2003) to three-quarters (2004), with a median of 58%. Over the period of the study, there was no sign that the mismatch between horseshoe crab spawning and shorebird arrival was getting stronger.

Masses of most of the Knot and Turnstone caught in Delaware Bay were within the published range for the two species (Knot 125–205 g and Turnstone 84–190 g) with individually-marked Knot doubling their weight during their stay.

The estimated rate of mass gain per day varied between 2.7 g/day (2005) and 15.9 g/day (1997) for Knot and 2.2 g/day (2014) and 5.8 g/day (1998) for Turnstone. Between years, as predicted, there was far more variability in weight gain for Knot than for Turnstone, with the most pronounced difference being between the maximum rate of weight gain for individuals of the two species. The variability in this parameter for Knot was three times that for Turnstone. For both species, there were higher refuelling rates in years when mass gain started later in the season, with no trend in fattening rates, over the twenty-two-year study, for either species.

Not a lot of Knot

This 2004 paper and subsequent annual counts of crabs and birds drew attention to overfishing problems in Delaware Bay, leading to a stakeholder-led adaptive horseshoe crab management plan, as described in this paper by McGowan et al. Developing the adaptive management plan required bringing together many groups of stakeholders, with very different values and objectives, to develop a strategy that would allow for the regulated harvest of horseshoe crabs, with a strong emphasis on protecting shorebird populations – especially Knot. The Delaware Bay horseshoe crab population now appears to be stable and it seems that shorebird populations using Delaware Bay have stabilized as well, although at much lower numbers than previously recorded in the Bay.

Conservation initiatives have restricted the impacts of the horseshoe crab fishing industry, reduced disturbance of feeding birds and showcased the importance of Delaware Bay to local people and visitors. You can learn more in this 15-minute programme: Feast on the beach http://www.delmnh.org/feast-on-the-beach/ 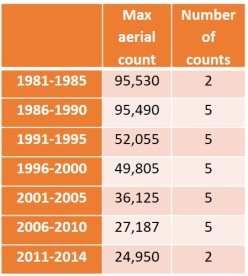 Aerial counts of Knot and other shorebirds have been taking place in Delaware Bay since 1981. Over this period Knot counts have varied but the big peaks of nearly 100,000 of the 1980s are now replaced by peaks that rarely exceed 25,000. See table taken from totals reported in USF&WS Rufa Red Knot background information and threats assessment. The declines in the Delaware spring passage numbers are similar in size to the drop in numbers seen wintering in Tierra del Fuego (far south of Argentina).

Why have Knot been so badly affected?

As outlined in the earlier papers and predicted at the start of the new study, the timing of pre-migratory fattening and the rate of mass gain were linked to timing of food abundance for specialist Knot but not for generalist Turnstone. Additionally, mass gain was far more variable in Knot, between years, suggesting greater sensitivity to local conditions (see figure). The way that Turnstones gain mass was more consistent across years and was not associated with abundance or availability of horseshoe crab spawn, which aligns with an ability to dig up buried eggs and switch to alternative prey items. The adaptability of Turnstone is discussed in the blog Why do Turnstone eat chips?

The Knot is a highly adapted long-distant migrant. Studies elsewhere have shown that individual Knot can reduce the size of the gizzard, intestinal tract and organs, once they have fattened up for migration. Upon reaching Delaware Bay from southern South America, many Knot will have travelled over 6,000 miles.  The authors suggest that having an available supply of high‐quality soft‐shelled horseshoe crab eggs, which can be consumed without increasing gizzard size, may be particularly important to Delaware Bay Knot. Turnstone are thought more likely to migrate in shorter hops, a strategy that could be physiologically less challenging.

Knot refuelling was slower in years when there were more horseshoe crab eggs, suggesting that a slower mass gain is preferable and that there may be a physiological cost of rapid fat accumulation. Preliminary work (Tucker 2019) suggests that annual survival of Knot appears to be lower in years following springs in which individuals gain weight rapidly. 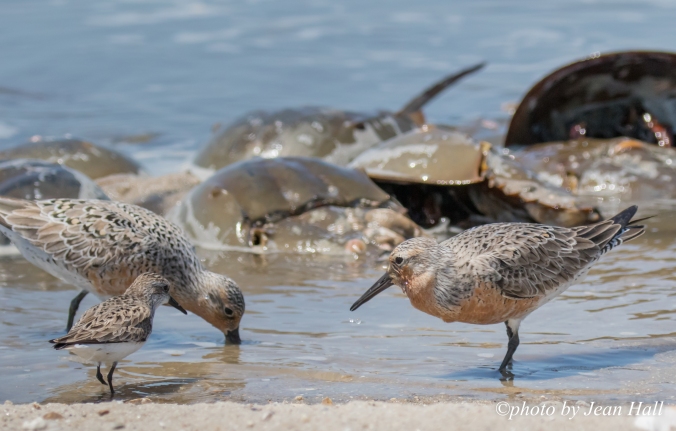 In cooler years, with later horseshoe crab spawning, mass gain in Knot was faster, suggesting that birds try to “catch up” at the end of the season, to avoid a delayed departure. It would be interesting to know the upper limit of this extremely rapid mass gain, and whether there are costs to piling on the fat. Such costs could be physiological, in terms of flight efficiency, or there could be increased predation risk if vigilance is compromised while feeding more intensively, for instance.

Breeding shorebirds are constrained by a narrow time window for nesting and a fixed single‐clutch size (usually four eggs). This means that they have little flexibility to compensate for unfavourable conditions previously encountered during migration. In a warming world, with more unpredictable weather patterns, mismatches between food supply and the timing of migratory fattening could well occur more frequently, with downstream consequences for productivity and annual survival rates. The authors point out that this could be particularly bad news for populations of shorebirds that have limited capacity to vary timings within their annual cycles.

Long‐distance migrants rely on predictable resources at stopover sites; even when these linkages are simple and predictable, populations can be vulnerable to change. The Tucker paper suggests that generalist foraging strategies, as used by Turnstone, may dampen the negative effects of phenological mismatch.

The Knot that use Delaware Bay have probably been relying upon horseshoe crab eggs for centuries and, as long as conditions remain predictable, this remains a good strategy. Over the years, there will have been cold springs, with consequent lower productivity and reduced survival, and other springs in which a superabundance of eggs has fuelled a wonderful summer of eggs, chicks and high survival. Overfishing of horseshoe crabs and more unpredictable spawning conditions appear to have tipped the balance and may (at least in part) explain huge declines in the number of Knot that visit Delaware Bay in spring. This population of Knot has been paying the price for being fussy eaters.

Graham (@grahamfappleton) has studied waders for over 40 years and is currently involved in wader research in the UK and in Iceland. He was Director of Communications at The British Trust for Ornithology until 2013 and is now a freelance writer and broadcaster.

3 thoughts on “Red Knot pay the price for being fussy eaters!”