In the period 1995 to 2013, England lost 32% of its breeding Curlew, 31% of its Redshank, 27% of its Lapwing and 14% of its Snipe*, according to the latest Breeding Bird Survey results. The uplands are the main stronghold for Curlew and hold (or used to hold?) significant numbers of the other three declining species. Is the story one of total gloom or are there areas where sensitive farm management and agri-environment payments are successfully supporting waders and other species associated with upland farms? A new survey, funded by Defra and coordinated by BTO aims to find some answers.

* Please note that the figures for population changes have not been updated. They all relate to the period 1995 to 2013. Latest figures can be found by following the link to the BBS results (see above).

The snappily-titled Breeding Waders of English Upland Farmland survey starts in April and volunteers are still needed in many areas. Please visit the BTO website if you may be able to help.

More about the key species: 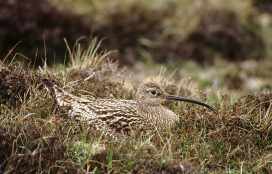 Curlew (recent 32% decline in England). The species is globally defined as near-threatened and has been added to the red list of conservation concern in the UK. Losses have been particularly severe in Ireland, Northern Ireland and Wales but the distribution is shrinking in England. There’s a WaderTales blog about Curlew here. Is the Curlew really ‘near-threatened’?

Lapwing (recent 27% decline in England). Most of the work to try to understand recent declines in Lapwing numbers has been undertaken on lowland wet grassland, where cooperative mobbing of predators is an important part of the daily routine for parents. In the uplands, where breeding densities are lower, it would not be surprising if predation pressures could be impeding species recovery. There are two WaderTales blogs about these issues. A helping hand for Lapwings and How well do Lapwings and Redshanks grow? 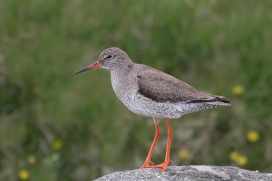 Redshank (recent 31% decline in England). The situation for Redshank is very similar to that for Lapwing, the presence of which may help in predator defence. There is a WaderTales blog about the special issues in the Uists (NW Scotland), where introduced hedgehogs are causing huge problems in this key wader hot-spot. Prickly problems for breeding waders

Snipe (recent 14% decline in England). The survey methods used in the new BWEUF survey are not designed to detect Snipe, which are mostly active at dusk, but the visits should provide useful count and distribution data for an under-researched species. 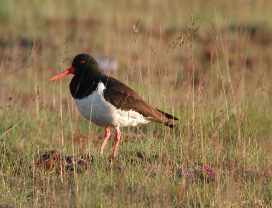 Oystercatcher (recent increase of 56% in England). Much of the increase may well be occurring in river valleys and newly created wetlands and gravel pits, rather than in the uplands. We know from the recent Moorland Forum report Understanding Predation that there have been changes in Oystercatcher abundance in much of upland Scotland between 1990 and 2010, potentially linked to predation pressure. It would not be surprising if similar processes operate in the English uplands.

How the BWEUF survey will work

Breeding wader populations in the UK have been a major conservation priority for some years. Declines continue despite the implementation of conservation measures that are designed to deliver appropriate habitats, some of which are supported through agri-environment schemes (AES). While enhanced monitoring of many upland and lowland habitats would be valuable, a particular gap is evident for in-bye farmland. This habitat can be defined as juncus/rush pastures, semi-improved pastures and meadows below the moorland line, although it technically includes all enclosed farmland. Using Defra funding, Natural England has commissioned BTO to run a volunteer-based survey, with RSPB field-staff filling gaps in less accessible areas.

This project will assess the importance of in-bye land for waders, by estimating the total numbers present in these habitats, relative to national estimates measured from Bird Atlas 2007-11 data. More importantly, it will set a baseline against which to measure future change in breeding numbers.  This will be used to assess the success of Environmental Stewardship management, as well as to measure differences in numbers between AES and non-scheme habitats for waders that nest and/or forage on in-bye farmland. The survey will use 2×2km grid squares (tetrads), as in Bird Atlas 2007-11. Volunteers are asked to make two morning visits to each tetrad, one between early April and mid-May and a second before mid-July, with a minimum of a two-week gap between visits. On each visit, volunteers will be asked to survey as many as possible of the fields in this in-bye buffer of 1km below the moorland line. They will walk to within 100m of every part of each field to which they have access, recording all birds seen and heard, noting any display or territorial behaviour and mapping the locations of target wader species. 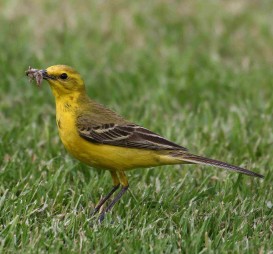 There’s an opportunity to record other species of conservation concer, such as this red-listed Yellow Wagtail (Jill Pakenham)

The key features of grassland management and structure, along with other land use, which dictate suitability for waders, will be recorded.  Predation has been identified as one potential driver of population decline – or an impediment to species recovery – so observers will be asked to record avian and non-avian predators.

Birdwatchers do not normally spend much time in this in-bye habitat so here’s an opportunity to capture as much information as possible, especially for any other waders and gamebirds (Black Grouse, Grey Partridge, Pheasant, and Red-legged Partridge). Valuable information can be data can be collected for Cuckoo, Linnet, Meadow Pipit, Reed Bunting, Ring Ouzel, Skylark, Stonechat, Twite, Wheatear, Whinchat and Yellow Wagtail, many of which are red-listed species of conservation concern (and bonus birds on a day’s birdwatching). To view further information on survey methodology follow this link.

The wader declines quoted in this article use Breeding Bird Survey data from 1995 but there is evidence of longer-term falls for Curlew (55% since 1975), Lapwing (65%), Redshank (65%) and Snipe (90%). These are worrying numbers and it is to be hoped that the BTO can find enough volunteers for BWEUF, despite the fact that many of the survey squares are a long way from the flat-lands in which most English birdwatchers live. Curlews, Lapwings, Oystercatchers, Redshanks and Snipe are counting on us to count them.

One thought on “All downhill for upland waders?”